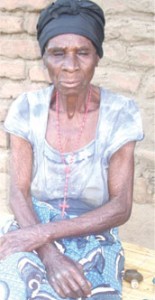 Despite government and development partners’ intervention, multitudes in Chikwawa are still on the verge of facing acute hunger.

The situation has been aggravated by the fact that many people lost the bulk of their crops in gardens because of floods that devastated many areas in the district.

The old, the frail and the poor are worst hit.

“The impact of hunger in most villages around here is negative, especially among those who cannot find alternative sources of income, including the old. The point is, most people here rely on farming for survival and when floods claimed our potential crop yield, we have been reduced to beggars,” said in an interview Khofi Mathalauza of Pende Village, Traditional Authority Kasisi.

“Yes, some of us do piece works or carry people on our bicycles as taxis, or burn charcoal to sell but, still, the little we get in form of food bought, is shared to so many of our unable kinsmen and the old. A bucket of maize is being sold for over K750 and not many can afford to feed larger families, so indeed hunger is a reality as some people are really sleeping on an empty stomach,” said the father of four children.

He laments that people have to trek longer distances to buy food, which also drains parts of their meagre resources through transport costs.

A case of desperation and ugly side of pangs of hunger can be cited and it is that of Gogo Namasingo Biton, an 82-year-old single grandmother.

“Mostly I eat once a day, and there are times I miss Nsima [stapple food] after eating these other things like a little potato portions. Yes, some time ago I received some relief ration from World Vision – 50 kg maize, cooking oil, and beans – but considering that I also care for grandchildren, it has not been enough to date,” said the old grandmother, whose husband died two months ago.

“After the death of my husband the situation is worse, more hunger is eminent as I don’t even know where I will be getting food. And, despite my age and needy status, the system has not included me as a beneficiary of Farm Input Subsidy Programme (Fisp), so the old and frail risk facing more hunger in future,” she said, in an interview at her Kabudula village, Traditional Authority Katunga.

Group Village Head Kabudula, while appreciating timely relief response from government and other stakeholders, feels the food relief being given out is “just a drop in the ocean”.

“Take the case of my village; I have 340 people in need of urgent food relief yet only eight people have benefitted. Now, consider the amount of people who are in such needy status in the whole district and you will realise more has to be done.

GVH Kabudula feels government must immediately roll out a mega irrigation initiative it has been preaching over the years.

“Other than relying on rain water – which always brings about flooding –we could do better if we depended on winter cropping by way of irrigation [using canals] just like Illovo does with sugarcanes – we in Chikwawa can produce enough food and avoid being reduced to beggars as the case is now,” he said, saying long term solutions can save peoples’ lives.

Senior Traditional Authority Ngabu, in an interview, also hailed government, developing partners and nongovernmental organisation for being timely in bailing out people from the “what could have been a worse hunger situation”.

“Thanks government for being pro-active and timely in their role of rescuing people from the hunger situation by offering relief and rehabilitation. But when we look at the situation, things are not okay, the food situation is pathetic as peoples’ crops and livestock got destroyed by the floods, people are almost destitute in terms of food shortage,” he said.