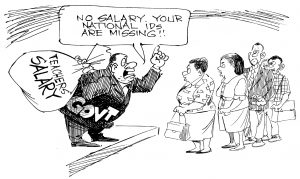 There is a very beautiful song that was done by reggae group Culture, with the late Joseph Hill on vocals, called ‘Payday’, in which a man asks his master to tell him when he will get his pay (in this case, freedom or emancipation since the person was in bondage due to slavery).

Slave driver, when will pay day be?

Tell us this hour, when will this payday be?

I could not help but recall this track earlier in the week (and no, I was not lining it up for Reggae Session on Times Radio) as thousands of teachers in public schools and teacher training colleges decided that enough is enough and made a bold statement to Capital Hill; putting their foot down that they would not set foot in the classroom to teach learners unless their colleagues (about 5,000 of them) receive their December 2019 salaries.

And cheesed off by the lack of lessons and inactivity within the schools, some learners decided to join their teachers in the cause; taking to the streets and storming district councils to enquire why their teachers are being treated with complete disregard and disdain.

It is a pity that people who have had the privilege of sitting in a classroom (and have probably attended public schools all the way up to college) now no longer see significance in motivating teachers in public schools, evident by their failure to pay them on time. It cannot be disputed that every person that is occupying an office at Capital Hill, even President Peter Mutharika and his Cabinet, have sat within the walls of a classroom, not just to chitchat but to tap knowledge from books and teachers that we are now forcing to work without paying them for their troubles. The only difference is that some came out of the classroom with knowledge and wisdom while others jumped out through the window the very first lesson.

What hurts the most is that many of the people that call the shots within the public system, and most likely gave their blessings to the Education Ministry to go ahead and deprive the 5,000 teachers their December salary, can afford to send their children outside the country or indeed to grammar schools while sons and daughters of ordinary citizens are being denied a chance to acquire knowledge since their teachers have downed tools. While they sit in those comfortable chairs, busy puffing airs as they chew away taxpayers’ money, the big bwanas (especially those holding political office) should realise that as they victimise those innocent teachers who have done nothing but to serve diligently in the schools they were deployed albeit with no festive pay last month, they are also indirectly hurting the electorate because their wards/ children are being denied an education simply since teachers were refusing to teach without getting their dues so be warned; what you do now can have dire consequences in the long run.

In the first place, who is it that decided to tie the issue of National Identity Cards to civil servants salaries? Like some experts have observed, the issue is a non-starter because, during engagement, the employer and employee do not place a condition or clause in their agreement that salary will depend on presentation of national IDs. Yes, circulars can be issued but let it be known that somebody can just wake up on the wrong side of bed today and make unilateral decisions such as the one we are witnessing, that has led to the inhumane treatment of our noble teachers.

Come to think of it, why is it that the government employees were being asked to individually present their national IDs when, in fact, the agency that was processing the documents, National Registration Bureau (NRB), is part and parcel of the same government? In my layman’s thinking, I feel it would have been plausible for either Treasury or Ministry of Education to simply run a verification check using teachers payroll against the database which NRB has. After all, the national ID registration was carried out in all of the country’s districts, which means there is steady pool of information either at the district level or at the NRB headquarters from which every employee could have been verified as opposed to placing the burden on the teachers, some of whom claim had already submitted their national IDs but the system being what it is, they got piled up somewhere therein until alarm was raised and they were forced to verify the same.

The above goes to exemplify everything that is wrong with this country: nobody cares about the welfare of those hardworking citizens serving in various government ministries, departments and agencies. No employee deserves to go through the experience that these 5,000 teachers have undergone.

Start where you are

Flourishing at the expense of the poor