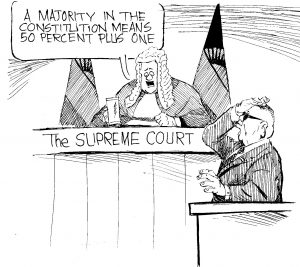 The biggest loser from last Friday’s ruling of the Supreme Court is obviously President Peter Mutharika and his DPP.

They thought they wrapped it up on May 21 last year and that the President would comfortably govern for the next five years and then come 2024, hand it over to his chosen successor in the DPP.

Now they have a tough fight on their hands on whether they will retain government.

The easiest reaction from both the President and his party could, therefore, be one of anger and bitterness at the Supreme Court and of course, Dr Lazarus Chakwera and Dr Saulos Chilima as bad sore losers who depend on the courts to fight political battles for them.

The danger with such an approach is that it will blindfold the President from seeing and accepting reality. This will further influence him to make wrong calls for the future of this country in the light of the Supreme Court ruling.

On the contrary, redemption for him and his party lies in looking at the larger picture and what the ruling really means for the people of Malawi and its consequences on the nature of politics the country is going to practise forthwith.

The larger picture that I implore Mutharika to see is that at the stroke of a pen, seven Malawian brave men of the Supreme Court of Appeal upheld a lower court ruling that declared the President was not duly elected, re-affirmed new definition of majority vote thereby dropping a bombshell that changes the political landscape of Malawi.

This is definitely the single most important ruling for the past 26 years that changes the way Malawi is going to be governed with far reaching consequences in the political road map that the country will adopt and constitutionalism in general.

This highest court of appeal in the land upheld entirely the lower Constitutional Court judgment which a panel of five judges delivered on February 3, 2020 on the Presidential Election Case.

The decision has certified electoral processes currently underway ahead of a fresh presidential poll.

The ruling is not a surprise in my view. It just confirms that elections in Malawi have been run with impunity in the multiparty democracy without strict regard to the law.

The consequential orders make a lot of sense too. The seven member judge panel ordered that only candidates who were eligible to contest in the nullified election will contest in the presidential election, which potentially reduces the options for the voters.

Let us face facts; this race has been reduced to two people who are Chakwera and Mutharika himself.

The order that Mec should also use the same voters roll that was used during May 21, 2019 general elections nails it all.

It is very significant, especially coming now when there were serious accusations of underage children being registered after some candidate(s) thought it would boost their chances of winning the elections, fearing alliances on the ground.

Then the Supreme Court was on the case of Mec and told it in no uncertain terms that its management of last year’s elections resulted in gross violation of Constitution provisions demonstrating serious incompetence and negligence on duty on the part of the commissioners.

Sadly, we have seen some kind of arrogance on the part of some commissioners in their reaction to the ruling and would want to suggest that they are not in wrong.

That, to say the least, is tragic.

The question that Malawians are asking such commissioners, including chairperson Jane Ansah, is what is it that will make them to accept that they messed up last year’s elections and then move on.

And the electoral body got some education in abundance including the fact it had no right even to make the appeal, arguing that in the scheme of the law, the commission takes a position of a referee in an election and would continue to play the role even in the proceedings in court.

These are school boy legal errors by a body surprisingly headed by a Supreme Court judge.

Then of course, the elephant in the room was the interpretation of the word majority in the Constitution which now means 50 percent plus 1.

This has changed the politics of this country forever and it will go very far in sanitizing and changing the landscape of politics in Malawi and stopping the crookedness of some politicians in exploiting tribalism, regionalism and nepotism in securing political power.

On the contrary, we will see broad based alliances and unity for anybody dreaming to ever secure the presidency in this country that will go beyond his own tribe or region of origin.

By all standards, this is a brave judgment that did not flinch an inch from declaring a sitting president that he was not duly elected not out of any animosity to the status quo but to make sure laws are followed to the letter as the framers and Parliament envisaged when making them.

It was a magical judgment and just like it was in the Constitutional Court, it came unanimous.

From here we should go for the presidential election as it is cast in stone that we must have it.

The confusion surrounding Mec and the dates for the election that must happen within 150 days from February is regrettable and recipe for disaster that this country cannot handle.

The sum total of all this is that politics in this country has changed.

The President and his DPP must accept this reality that there would be no reverse.

It is only then that they will see the larger picture and accept it.

The President still has a part to play to ensure transition to this new constitutional order.

Playing political games and brinkmanship will not help anybody.

Politics has changed in Malawi and it is forever.