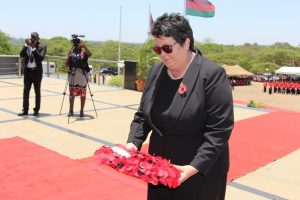 Mutharika marked the day by laying a wreath at the Lilongwe War Memorial Tower in honour of soldiers who died in the line of duty during the first and second world wars.

November 11 2018 marks exactly 100 years since the First World War ended and Sunday was a remembrance day for the soldiers who were wounded and killed during the wars.

Over 19,000 Malawian troops participated in the two world wars.

Some of the notable figures at the ceremony were Malawi Defence Force (MDF) Commander Griffin Supuni- Phiri, Inspector General of Police Rodney Jose and members of the diplomatic corps.

During the day, the country also remembered MDF soldiers who died in the United Nations Force Interventions Brigade.

“We have a responsibility of looking after these people and we also get engaged in different activities to raise funds for these people,’’ he said.

Inmates on anti-retroviral therapy at risk