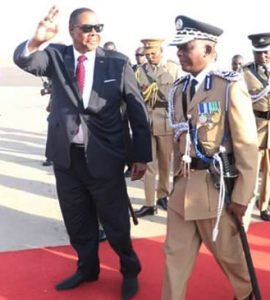 Mutharika spoke Monday when he landed at Kamuzu International Airport (Kia) from New York, the United States (US), where he attended the United Nations General Assembly (Unga).

Mutharika said he had set up a dialogue committee to meet the CSO leaders on their concerns and did not understand why they went ahead with the demonstrations.

“I sincerely missed the demonstrations and I am very glad that they flopped. What the country needs is dialogue and not demonstrations,” he said.

Despite missing a meeting on the Millennium Challenge Compact and tuberculosis, Mutharika said he was impressed by the work-rate of his delegation to the US.

In the US, Mutharika co-chaired a meeting with former United Kingdom prime minister Gordon Brown and attended a HeForShe campaign meeting

“There were a number of meetings and everyone worked hard from myself, the First Lady, the ministers and all civil servants who went there. We shared our views because we believe in the ideology of the UN,” he said.

Mutharika addressed the assembly on September 25, pledging youth empowerment, among other things.

“Again, no society can progress without the youth. Malawi is, therefore, implementing a number of programmes youth. This includes a skills development programme that involves establishing community technical colleges,” he said.

Mutharika then bragged about what he called significant economic transformation which the country has seen in his four-year reign.