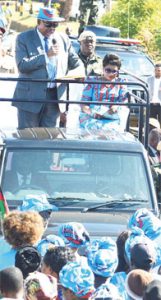 “Calista Mutharika is the one who killed President Bingu wa Mutharika,” Jeffrey said much to shock of everyone around.

Late Bingu, the elder brother to the incumbent President, died from a heart attack after he collapsed in his office at State House in Lilongwe in April, 2012.

“The Press conference that took place in Lilongwe this week by Masangwi, Kaliati, Kalindo and others are the same people that wanted money from you sir,” Jeffrey said.

The former first lady Saturday found it difficult to fathom the reason for Jeffrey’s accusation.

“I didn’t know that people would play this cheap politics but I won’t sink to her level…that’s Jeffrey’s character,” Callista said.

Former Press Secretary to the late President, Chikumbutso Mtumodzi, expressed shock that the DPP Secretary General made such pronouncements.

“The whole world knows that there was a commission of inquiry and the findings never came close to what Jeffrey is saying…it’s very unfair to accuse the former first lady,” he said.

President Mutharika took the podium from Jeffrey and tore into the Chilima movement warning them of stern action if they continued their political shenanigans.

Mutharika said that he refused to give money to Masangwi, Kaliati and others. “That’s the reason why they are doing this against me,” Mutharika said before proceeding to Luchenza.

The President sounding fired up, challenged Chilima saying he will defeat him at the convention.

Mulanje and Thyolo are under siege from the Chilima faction.

Over the last few weeks, the movement has been mobilizing grassroot support in the two districts calling for a convention. The Movement has also been demanding that Vice President Saulos Chilima should be allowed to contest.

From Fisp beneficiary to commercial farmer