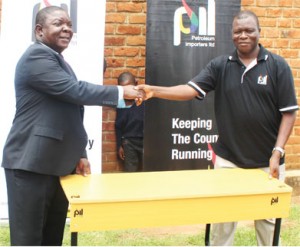 Fuel importer Petroleum Importers Limited (PIL) has set aside over K50 million for its charity works for the year 2016.

The funding is mainly targeting the education and health sectors.

PIL general manager Enwell Kadango made the revelation at the donation of desks worthy over K 1.5 million at Njuli community day secondary school in Chiradzulu on Friday.

“This year we are earmarked to go on with our charity work and mostly we are focusing on the education and health sectors,” said Kadango.

Kadango said part of the funding will at least benefit one school in each education division across the country.

He further said the company is also earmarked to channel a chunk of the resources into the health sector.

First beneficiaries of the funding are students of Njuli community day secondary school where the company donated 50 desks.