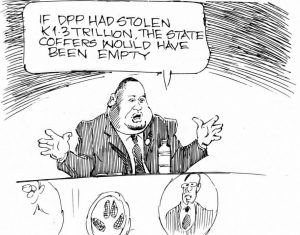 Whenever the word figure is mentioned, I usually get a kick because of a crude joke that one of my colleagues in the newsroom, who is currently abroad, once told about a mix up in communication between a certain preacher and his interpreter. Apparently, the preacher (who was conducting his sermon in English) had used the word figure to mean numbers but…Lo and behold! The interpreter had thought he meant something else.

Calm down, we are not getting into that. The word figure was once again in the limelight in the course of the week following proclamations by President Lazarus Chakwera that the then Democratic Progressive Party (DPP) led administration plundered one within the regions of K1.3 trillion. Now, this was the figure that caught my eye.

Why, you may ask? Well, in May 2017, the then Finance Minister presented a whole National Budget for the 2017/2018 financial year of that amount. If our entire country can function around that figure then, that alone should give you a picture of how enormous the amount is and how much a difference it can make to the lives of the 17 million plus Malawians, a majority of whom are grappling with pangs of poverty. It is inconceivable that a whole system can stand aside and look while some ill-minded individuals, acting in the name of the governing party (It would not be wrong to call them crooks or mafias, I hope) plundered, albeit with reckless abandon, a whooping K1.3 trillion and yet there were a myriad of problems in our hospitals, education system, not to mention constant hunger and perennial floods that needed immediate attention.

It is regrettable that the DPP politburo seems to think that this is a matter they can make light of by claiming that the President is exaggerating the figure. The least the party could have done was to pursue the repentance avenue; hoping and praying that Malawians would forgive the misdeeds of those within its rank and file behind such a gigantic plunder. I totally agree with sentiments by the leader of opposition and DPP vice president for the Southern Region, Kondwani Nankhumwa, that everyone must account for their role, regardless of their political affiliation at present…now that is the kind of spirit we would love to see, instead of the former ruling party pre-occupying itself with refutal and dismissive statements that are, for a lack of better word, senseless.

It now appears to be the tradition that whenever those with vested interests (for all the wrong reasons) realise that the party they associate with is a sinking ship, they quickly shift their allegiance to the ‘hot kid on the block’ which is why I would urge the Tonse Alliance leadership to take Nankhumwa’s sentiments seriously. In this battle where President Chakwera and Vice President Saulos Chilima are clearing the rubble; all the rot has to go, regardless of political affiliation. There should be no sacred cows when it comes to tracking those who played with the general welfare of Malawians by siphoning public funds.

On the other hand, If DPP wants to remain relevant, then now would be a good time to kick start a rebuilding exercise that should be punctuated by remorseful and noble acts, otherwise, it is speeding fast on a highway to down under. I am only hoping that those who were refuting the figure peddled by President Chakwera the other day have come to the table with clean hands because, should it turn out that specifically, they too dipped their fingers in the kitty then, lord forbid, all hell will break loose.

For those marshalling public funds at the moment, what is unravelling right before our eyes through these corruption allegations and the fraud and money laundering cases at the courts should serve as a lesson that when you are in that public position; consider it a privilege and honour that you are a custodian of public interests. Do not take advantage of your positions to steal from taxpayers what does not rightfully belong to you. You will be traced…if Malawians can pour out their heart and soul by seeing to it that DPP is booted out of the system, they can equally do the same should you squander the chance that we now have to breathe a new lease of life into the system.

As we speak, there could be someone who is unashamedly trying so hard to extract a little ‘something’ from the system; even from the Covid-19 funds that have been mobilised so far. This kind of behaviour should never be tolerated…never again!

Sorry, I deviated a bit. The story here is about figures. Now, since DPP is disputing the figure of K1.3 trillion that President Chakwera intimated they had blown, can they be brave enough to give us the actual amount, if any?