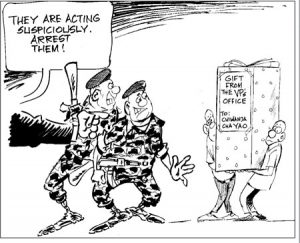 The political climate is getting more overwrought and we will be seeing more peculiar events as the day of elections draws nigh.

That is not strange; it has happened before and is not unique to Malawi. In other countries, you even get reports of aspirants being kidnapped, even assassinated.

Still, that does not mean even ridiculous events should be allowed to fester, especially in Malawi, where peace is the guiding principle.

We are being bombarded with cases of politicians trying hard to outsmart each other in glamour and, sometimes, castigation to show that they can do better than their competitors.

There are even those who use their political clout to intimidate and order arrests of their opponents.

And, as is usually the case, those in power are liable of being judged with some open mind because they are often seen to have authority, even if it is illegitimate, to victimise their adversaries, purported or otherwise.

That is why recent events concerning the Office of the Vice- President cannot be simply seen through the regular prism.

First, two of his aides were arrested in Balaka for apparently acting suspiciously during a ceremony to launch Chiwanja cha Ayawo at Mangochi Turn-off. President Peter Mutharika presided over the ceremony.

Anyone who seems to be in a position to compromise a president’s security cannot be treated lightly, especially in countries with terrible histories of assassinations.

But the intelligence of security, I believe, also entails understanding clearly the nature of people you are dealing with and whether they can indeed “act suspiciously”.

Well, the police are supposed to ensure that security is tight wherever the President is. There is no debate on that but, sometimes, things are just blown out of proportion and politics ruins all the good work.

At the Mangochi Turn-off ceremony, we hear that the two men who were captured by the police at Chingeni Roadblock had been sent to deliver a gift by Vice-President and UTM leader, Saulos Chilima.

Now, since they had arrived a little later, they had to wait to be allocated seats and this entailed that they were likely to be roaming around while waiting to be shown where to sit.

But because they are from an office whose holder is not in good books with the President, they were presumed to be security threats.

While the police might have just been doing their job, I dare say their conduct smacks of some attempt at political rightness. If they were not pushed to act like that, then they might have wanted to show which side they are on.

It would be interesting to see how the whole drama ends. I hope it will not just disappear like those other cases where people are arrested without sufficient primary information only for the police to dump the cases.

Otherwise, we could just be increasing the number of people who will claim millions from our washed-out coffers in compensations for illegal arrests.

Second, a police vehicle which was part of Chilima’s security detail was snatched from one of his drivers. This is despite that a court order, that is still in place, stopped the police from interfering with the Veep’s security.

Even police officers who were moved from the Veep’s office but stayed after Chilima obtained an injunction against the decision to transfer them are being hunted by their bosses who are accusing them of absconding work.

The matter is still in court and it may by prejudicial to comment on it in detail. However, where there are clear disregards of directives or sheer overzealousness by some officers, there is no harm in speaking about that.

The reason the police and other public officers should be careful with how they treat Chilima and his aides is that they will always be judged harshly on that.

In all this, the victims are the 41 police officers that were assigned by Police Headquarters to be part of the Vice-President’s security detail. They did not assign themselves.

But now they are pawns in the chess game of politics. They were to be subjected to a disciplinary hearing with possibilities of dismissal and were only served by a High Court injunction.

And what is their crime? They were assigned to guard the Vice-President who broke away from the ruling DPP and now formed his own party.

We know that some acts by these offices exacted on the Veep are possible now because he is not in good books with his boss.

But they boomerang on the current administration and raise questions on why a purported political enemy should be maltreated and what is the benefit.

Can’t the DPP strategists see what all of us can see that the idea of getting even with the Vice-President only ends in boosting his presence in the public conversations and therefore creating a victim in the eyes of voters?

There is no room for politics of terror and intimidation in the 21st century Malawi.