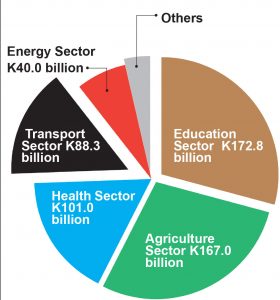 Analysts have since warned that at 62 percent of the Gross Domestic Product (GDP), public debt if left unchecked could cripple the economy.

Among other things, Mwanamvekha indicated that interest payment on the country’s public debt is projected at K243.9 billion or 3.9 percent of GDP, representing 8.8 percent increase from the amount paid during the last financial year.

The money allocated towards interest repayment is K71.1 billion more than the K172.8 billion for education.

Economics Association of Malawi President, Chikumbutso Kalilombe, said the high amount going towards interest repayment shows that Malawi has not been very prudent in as far as borrowing was concerned.

Kalilombe said a poor country such as Malawi cannot afford to have interest repayment taking the lion’s share of the national budget.

Institute of Chartered Accountants in Malawi Chief Executive Officer, Francis Gondwe, concurred with Kalilombe in a separate interview that the K243.9 billion interest repayment bill is enormous and is hurting the economy.

“Much as borrowing, in itself, is bad, we need to look at prudent ways of using the borrowed money. As a country, we needed to use borrowed money in productive sectors which could generate even more resources rather than consumption,” Gondwe said.

But Mwanamvekha was quick to note that the government was putting in place policies to help bring down public debt in the medium to long-term.

Mwanamvekha said the Medium Term Debt Strategy outlines measures that would translate into a reduction in domestic debt to 20 percent of GDP by 2023.

“[The] government will endeavour to borrow in a prudent manner to ensure debt sustainability for the current and future generations. [The] government recognises that a reduction in domestic debt requires an increase in revenue and reduction in expenditure to create fiscal space for retiring debt.

“Given the macro stability and low interest rates, [the] government plans to reduce domestic borrowing from K264.6 billion in 2018/19 fiscal year to K45.9 billion in 2019/20 fiscal year. In addition, external borrowing will be contracted with careful consideration to ensure realisation of value for money. My ministry is reviewing the terms and conditions of borrowing of all our external creditors to ensure that the government borrowing is on concessional terms and for projects with high economic returns,” Mwanamvekha said.

Among other things, the national budget is premised on the assumption that the local economy would swell by five percent this year and seven percent in 2020.

It also assumes that inflation would average eight percent this year and that the exchange rate would be stable at K750/ US dollar.

Mwanamvekha said total revenue and grants were projected at K1.575 trillion, representing 25.1 percent of GDP and an increase of 26.1 percent from the 2018/19 approved amount of K1.249 trillion.

He added that domestic revenues are projected at K1.425 trillion, which is 22.7 percent of GDP, comprising K1.369 trillion as tax revenue and K55.8 billion as other revenues or non-tax.

Agriculture has received K167.0 billion, or 2.7 percent of GDP, in the national budget while the health budget has been pegged at K101 billion.

Among the winners in the budget are workers who have seen the tax-free band on pay-as-you-earn being broadened from K35,000 to K45,000.

The budget has also smiled at people who import motor cycles as the government has removed customs duty on motor cycles with cylinder capacity of not more than 100CC to promote rural transportation.

Mwanamvekha also smiled at local producers as he has introduced a surcharge on the importation of commodities which could be locally made such as cement, cooking oil, fruits and vegetables.

The government has also considered importers of solar equipment by removing Value Added Tax on the importation of such products.

Among the losers in the budget are people seeking the government services as fees would be adjusted upwards.

“There has been an increase in the budget allocation which I think is a good picture and in additional to the increase at national level; we have also seen increment in various sectors for example education, agriculture and several other sectors.

“Most importantly, this budget has been aligned to the Malawi Growth and Development Strategy (MGDS) 3 which I think will help to achieve the goals,” she said. purse.