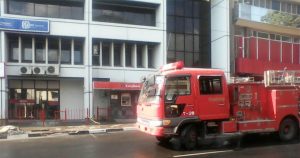 Fire has damaged Nico house in Blantyre, Malawi’s commercial city and property worth millions has been destroyed.

The fire started around 1 o’clock in the afternoon and took about three hours to be contained by the department of fire at Blantyre City Council.

Eye witnesses have told Times that officials from the department came in late to control the inferno.

The witnesses suggest that the blaze started after a microwave in one of the rooms of the third floor of the Nico building was left on and caught fire.

There were three fire engine vehicles, two of which were 1300 litres and the one was 2500 litres.

At the time of the incident patients who were at Shifa hospital housed in building next to Nico house were whisked away.

Senior fire officer responsible for operations at Blantyre City Council, Prescott Sailasi, says though there were some technical challenges they have managed to contain the fire.

He denied coming late at the facility saying that is “debatable”

Nico officials say will comment on the matter later in the day.

Nico officials say they will comment at a later time