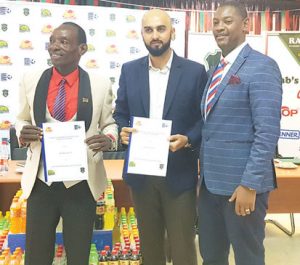 Rab unveiled the sponsorship at Football Association of Malawi (Fam) headquarters in Chiwembe Township, Blantyre, Wednesday under the banner of the company’s brand of soft drinks—Thumbs Up.

“We are excited to fulfill one of our core values, which is ‘Partnerships for life’ and we strongly believe that our newly found partner, football, will not let us down but give us all the reasons for a long and mutually beneficial relationship. We believe that we all have one aim, one goal and one destiny,” he said.

“Rab Group has made a great choice by associating with us. We are committed to achieving our goals. We had to put a lot of effort to get a sponsor as, nowadays, it is difficult to get a serious sponsor but it is easy to lose them. We will put in place necessary mechanisms to promote the league and safeguard its interests,” he said.

According to terms of the agreement, the contract can be extended to three years if the 2019 season proves a success.

“It is quite relieving to have found a serious partner in Thumps Up soft drinks. We are assured that our agenda to develop football in total and in remote areas is realised. In the past, teams could not assemble in good time for a new season due to uncertainties over prizes and referees’ dues but, now, there is no doubt because we are in good hands,” he said.

Rab has replaced United Purpose, which sponsored the league for a year under the Chitetezo Mbaula banner, to the tune of K11 million.

Inflation seen at 9.3 % in first quarter