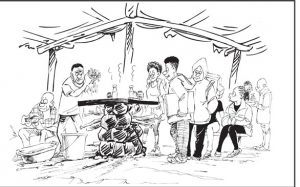 In our days, getting university education was pretty easier if you had the chance of getting a place at a public university. Everything was practically free. Heavily subsided tuition fees, a book allowance and decent meals were almost for all. There was little to worry about. As they say, all good things come to an end; things are no longer that easier these days.

Being selected to university is now almost a curse and instead of celebrating, the first thing that tortures your mind is how you are going to pay fees. Recently, I was gutted to learn that a young lad I know decided to drop out of college because he could not afford to pay K275, 000 as fees. This is a bright young man who was in third year and only had one year to go.

Today, I was told, he decided to settle in the village with a girl he impregnated. That is a sad tale of a raped dream. It tortures my soul these days seeing university students scrambling for chiwaya at lunch, and for supper, all they can afford is a cheap doughnut and some fizzy drink. Not so long ago, being a university student was something to be proud of but today we have degraded it by letting the students live like urchins. We should all hang our heads in shame.

Recently, the University of Malawi Council decided to, again, raise university fees for both mature and generic students. A first thought will be that the minimum K320,000 fees is not too much. This means one has to pay only K160,000 per semester.

Elsewhere, university education has never been cheap and if you want some, be prepared to pay for it. Besides, the university is not a charity club and it needs money in the bank for it to run. But we are not talking about elsewhere. This is Malawi where a good number of people are wallowing in stinking poverty.

I know of people who earn K600,000 a year and these have to feed their families, pay utility bills, rent and what have you. If, for instance, such people with measly income have a child to pay university fees for it means parting ways with more than half of the families’ annual income.

We should stop living in an illusory world where we think it is easy to pay K320,000. Of course, quite a good number can afford to pay that much. But if you were to do a head count, you will notice that these are children whose parents got an education when university was almost free. Ask around, and you will be told that most of the people who have plush jobs benefited from subsided university education and these are people who are contributing to national development; otherwise they could have ended up in some menial jobs whose salary cannot last a day.

The government, I think, must stop acting as if it is not aware of what education can do to one’s life. These students we are refusing to educate by imposing exorbitant fees might be doctors, lawyers, teachers, journalists and business captains the nation needs most. Clearly, there is an alarming degree of misplaced priorities in the country.

What beats me is that a nation that is way underdeveloped is failing to see the need to make education easily accessible for its productive citizen. Educating one student at only K1.28 million for four years is not asking too much from a government that has an appetite on spending on silly things.

Take, for instance, the current budget; we will be forced to buy more vehicles for the already long presidential motorcade, we will be paying interest on loans for those selfish members of Parliament yet we cannot see the need to properly fund the university. President Peter Mutharika has a retinue of useless advisors who, we are told, cart home a cool K1.7 million a month.

We are talking about hangers-on getting home in just 31 days, enough to educate one student for four years. Compare the two; the other is just a bunch of round-bellied, party-colour-faced bumblebees who have nothing better other than misleading the president while the deprived group is that of bright young men and women who are agitating to be an important part of the grand national building.

We do not have the luxury of postponing the education of our children. It is time we stopped being a tactless nation that does things in reverse. I am told we have a board that is designated to provide loans to needy students. But apparently, that board too seems to be less taken care of and in the end it has just being rendered dysfunctional as most boards are.

Whatever it must take, the government must not abrogate its duty of educating a nation. With students failing to proceed with education, we will end up creating a disgruntled generation poisoned by reticent anger, and that will be raping a nation’s dream.

Taking girls towards the education path