Investment in the agricultural economy, people and trade can the break the cycle of poverty and hunger which impedes progress across many southern African markets. In particular, it supports Malawi’s aspirations towards achieving its Sustainable Development Goals and establishing the country as a centre of regional trade.

The Liwonder Fertilser Terminal -the region’s largest, most advanced terminal and fertilizer blending plant situated on the Nacala corridor will provide a gateway connecting Malawi to the world via an upgraded railway to one of the best natural harbours on the East African coast. Consider its potential for value addition, and its role in import substitution, by improving access to quality, tailor-made fertilizer products to commercial and small farmers in Malawi and Eastern Zambia, and to the potential for increasing exports of minerals and grains.

Beyond the national benefits it promises for the Malawian economy, it also creates new employment and infrastructural capacity at home, as well as skills development and technology transfer. Cost effective farming inputs mean more disposable income and productivity for farmers, critical for sustainable food security and an exportable surplus.

From an economic perspective, the US$10 million invested in the terminal’s infrastructure demonstrates commitment to supporting government in achieving its goals as expressed in the Malawi Growth and Development Strategy III (2017–2022), to position Malawi as a production and export hub, whilst   increasing the country’s tax base and creating an economic multiplier effect on local industries and service providers.

The accompanying US$2,6 million rail and port investments offer trade benefits supporting Malawi’s foreign revenue generation, access to international markets and a supply chain that is more efficient than the regional road infrastructure.

The dedicated Meridian Farm Services Unit (FSU) demonstrates investment in, and commitment to, capacity building in the farming community.  Providing technical and practical advisory services to both smallholder and commercial farmers ranging from a full soil science service , to pioneering the largest soil testing project of its kind for smallholder farmers. 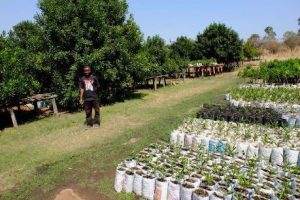 Agriculture is a cornerstone of Malawi’s economy, which according to the International Monetary Fund (IMF) “accounts for about a third of GDP and drives livelihoods for two thirds of the population”. Investment in the agricultural economy by the Malawian private sector therefore, in projects such as the Liwonde Fertilizer Terminal, have great potential to boost national growth.

Government seeks to boost manufacturing by 2030