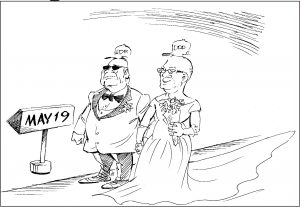 Governing Democratic Progressive Party (DPP) and United Democratic Front (UDF) on Tuesday morning officially announced what has always been known in the past two weeks.

And it is that the two parties had entered into some form of an alliance as a result of the impending election on May 19 to comply with the Constitutional Court ruling that nullified last year’s May 21 presidential election.

I argued last week that the DPP has been cornered and it has seen its world thrown upside down as a result of the Constitutional Court ruling in Lilongwe on that day of February 3 and that the party is in a fight of its life.

By redefining the word ‘majority’ in determining the winner of a presidential election in the Constitution to mean 50 percent-plus-one of the total valid vote, the five judges— Healey Potani, Dingiswayo Madise, Mike Tembo, Redson Kapindu and Ivy Kamanga— struck right at the core and heart of the very reason DPP has been in power.

Clearly, the party is in panic and that was the take-home message from the story in which hundreds upon hundreds of its members last week took to the streets in Blantyre and Zomba and Lilongwe this week to protest against the Constitutional Court judgment.

But the events of this week have largely shown that the party has accepted its fate that, barring an unlikely reversal by Supreme Court of the Constitutional Court ruling, there is an election on May 19 which Parliament signed and sealed by passing all relevant bills to effect the poll in three months.

Certainly, DPP Members of Parliament put up a good fight in Parliament to frustrate the bills that needed to be passed to create an environment to hold the election but it was a fight they were destined to lose as a court order is simply a court order that must be obeyed in the interest of rule of law.

President Peter Mutharika has not wasted time in showing that he will court UDF to be on his side in his quest to be re-elected come May 19.

It was, therefore, expected that on one rainy Tuesday morning in Lilongwe UDF leader Atupele Muluzi would exchange his yellow UDF cap for President Peter Mutharika’s blue one and vice versa.

But the big question is: After the theatrics of exchanging caps is long done and dusted, is this a mutually beneficial relationship?

What does each of the two parties get from this marriage of convenience?

The recent years have shown that the Atupele brand, the ‘Agenda for Change’, got irreparably damaged due to his dalliance with DPP from 2014 to 2019 that he got a measly 235,000 votes as presidential candidate during last year’s presidential election down from almost 800,000 in the 2014 election.

The question he must answer is: What is it that he will do this time so he adds value to Mutharika who will be seeking an outright re-election on May 19 by hitting the 50 percent-plus-one threshold.

Mutharika is a worried man and that is why he has wasted no time in staking this alliance because he can see power slipping out of his hands in three months if a miracle does not happen.

At the end of the day, this is an acceptance by the DPP establishment it was somehow favoured by the first-pass-the post system, hence its MPs’ vehement rejection to create an environment to apply the 50 percent-plus-one system of choosing presidents but which was bound to fail.

What remains now is for the party to lick its wounds and count its loss by trying to be strategic and stake a more advantageous position to still cling to power after the elections.

This is the real context of its remarriage with UDF after a divorce in 2005 when the late Bingu wa Mutharika left the yellow party in an acrimonious manner.

It can only be a result of a terrible misfortune or deep nostalgia for one to remember to remarry a wife they divorced after 15 years.

Clearly DPP is under serious pressure and pinned to the wall but the party will not waste time to get out to safety, hence this new alliance.

And talking of alliances, we have one that some people want to see in this country, yet it is not happening.

This is one that would involve MCP and UTM and there are serious problems why it is not happening.

Listening to UTM president, Saulos Chilima, speak on Sunday in Lilongwe during a rally and in subsequent interviews this week, I heard somebody who is not in a hurry and even toys with the idea that he can go alone and still get to State House.

That by itself is a sticking point coupled with who would be who in such an alliance if it were to happen today.

DPP is praying long may this last especially after sealing its own remarriage with UDF after a bitter and acrimonious divorce 15 years ago.

Kulima Mape at a glance