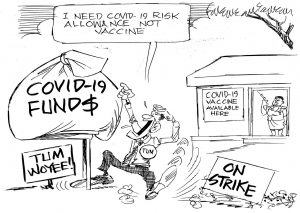 On Monday, members of the Teachers Union of Malawi (Tum) downed tools once again after returning to class for some three weeks, during which what they had claimed to fear appeared somehow so distant.

Despite scientists positing that teachers are not in the Covid-19 high-risk category, they defied reason and rushed to stay away from classrooms.

The concept of group psychology is working perfectly for them: Even those who would reject the strike arrangement are going with the flow because it partly satiates their sense of belonging.

Of course, there are others who see no morsel of merit in their colleagues’ decision to continue demanding allowances related to a scourge that is slowly coming under control and has proven effective prevention measures in place.

They are defying the irrational stay-away and continue teaching their learners who are in desperate need of continuous instruction after costly disruptions which have been partly blamed for the poor Malawi School Certificate of Education examination results released recently.

The Tum leadership does not seem to have a clear strategy of what they want in earnest. They are pushing for allowances related to a virus that has already proven to be less risky among teachers.

In the weeks that schools remained open, isolation centres were not overwhelmed with teachers or learners who had contracted the virulent infection and were in dire need of life support.

That seems to have augmented experts’ argument that teachers are not high-risk workers and are, therefore, not ideal to receive the risk allowances that they are demanding.

Yes, they are demanding the stipends, because that is the only demand that can make sense. They may argue that the government promised to give them a monetary token so they could purchase their own Personal Protective Equipment.

That points to the fact that they still believe they are at high risk— against any conventional position that has clearly categorised who is at such risk.

The problem is that the teachers, who are mindlessly withholding their services, are refusing to be brought to the table of reason. They are finding satisfaction in the herd reasoning championed by their leaders who are, in fact, being accused of advancing very political agendas.

Because Malawi is a democratic state, the teachers are holding learners to ransom and mind less about the implications of their decisions.

They are riding on the back of inconsiderate men and women who are simply using them as pawns in a bigger political game. Nevertheless, there should be a way out.

The few rational ones have shown it is possible to disagree with your leaders and the majority after allowing reason to prevail. They are in classes teaching their learners who will be steps ahead when others return to class.

Rumour has it that the teachers’ leadership, buoyed by politicians, is deliberately pushing for what does not make medical sense. Apparently, they have lined up a number of demands—supported by their lateral paymasters— to bring chaos in the system.

That is why even when a vaccine manufactured to tame the ravaging scourge is available for Malawians to access, they are demanding allowances for a risk they cannot justify.

The government had clearly indicated that teachers would be among the first group of social workers to receive the inoculation. Present figures indicate the majority of them have shied away from getting the jab.

Yet, they talk about being at risk and, therefore, eligible to receive any kind of allowance set aside to offset the threat. But, the truth is that the teachers are simply looking for something to top up on their incomes and might have willing opposition operatives to support their misguided cause.

Perhaps, a little review of how public officers conduct themselves would save this country from those who feel they are entitled to earn from the public purse even when they are doing nothing.

Otherwise, the conduct of the striking teachers raises questions about how much freedom public officers can have and whether they are not accountable for their actions if they are irrational.

While there are several other public servants who are sacrificing their lives to save and serve others, here we have teachers who have brought a larger part of Malawi’s public education system to its knees.

Some of them are blindly following others who might have very strange and irrational agendas. They are hooked up in battles they rarely understand—and are refusing to teach without appreciating the reasons for the decisions.