About 1,200 people attended the performances.

This was after St Andrew’s International High School decided to give patrons a memorable performance in Blantyre, bringing the best of Hamilton: An American Musical which is a sung-and-rapped musical about the life of American founding father Alexander Hamilton.

The performance had music and lyrics in it and this is a book by Lin-Manuel Miranda, inspired by the 2004 biography, Alexander Hamilton by historian Ron Chernow.

A tall order for the school adapting a performance that incorporates a lot including hip hop, R&B, pop, soul, traditional-style show tunes, and colour-conscious casting.

But the students were ready for the challenge after drama teacher Kevin Troughton, who has been directing plays for close to 30 years in United Kingdom, informed them about the project.

Other departments were involved in the production but those of drama and music were the main players in the set-up.

The lighting, costume,sound and the venue itself were on point.

I was reminded of the Broadway in New York, United States of America, where I had a chance to watch The Jackson 5. 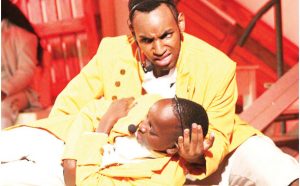 The seriousness that was put in the production was enough to win the hearts of the audience.

The other unique thing in the play is that actors and actresses use music to communicate to each other. There is actually a lot of music-talking than talking itself.

Troughton and team also did not compromise on costume which they made sure was on point to move with the story which takes us back to 1772. Hamilton came as a refugee to America, leaving life of poverty in the Caribbean. In less than 10 years, he had risen to become George Washington’s assistant in the war for independence. He became one of the most powerful men in American politics for the next 20 years, although he never became President himself.

The play has Act 1 and 2 and the cast, just like it is done at Broadway, had to break for the audience to grab a drink and snack before coming back for Act 2.

One of the students who won the hearts of people is Ronald Nyamilandu Manda, who played the lead role of Hamilton.

This was actually not his first time to play a lead role. He has proved to be a strong character.

On Tuesday, he actually starred in front of his father, Walter, who is Football Association of Malawi (Fam) President.

“It was challenging. There was a lot of learning and rapping which I am not good at but it was fun. Honestly, it was amazing and it was the second time I was playing a lead role,” Ronald said as he wiped sweat having been on stage for close to two hours.

Angie Perera, who played Eliza Hamilton, wife to Hamilton, said it was amazing to play a lead role.

“There was a lot of work put into it and this was challenging and the hardest musical performances and I am glad the school picked it,” she said.

She said, despite taking much interest in music, it was not automatic for her to excel in the production.

“I love music and this performance surely gave me a challenge and I love the fact that the performance was also showed to the community. It also shows that the school is developing in the areas of drama and music,” Angie said.

Troughton capped it all by hailing the cast for a job well done.

“We had nice comments from the audience and one of them told me, he had never seen a show like this in the country. They opened up to the artists because they wanted to share ideas for them to learn one or two things. The cast worked very hard, it was very difficult with more music in it there was just a lot to learn,” the veteran director said.

Several players in the creative industry, who were in attendance, said they had watched a professional performance.

“It is amazing. A lot of things to learn. The music, the sound, the dance, the coordination and time keeping was all there,” veteran musician Francis Mijiga said.

The musical made its Off- Broadway debut at The Public Theatre in February 2015, where its engagement was sold out.

In 2016, Hamilton received a record-setting 16 Tony nominations, winning 11, including Best Musical, and was also the recipient of the 2016 Grammy Award for Best Musical Theatre Album and the 2016 Pulitzer Prize for Drama.

The prior Off-Broadway production of Hamilton won the 2015 Drama Desk Award for Outstanding Musical as well as seven other Drama Desk Awards out of 14 total nominated categories.

The musical begins with the company summarising Hamilton’s early life as an orphan on the island of Nevis. After arriving in New York in 1776, Hamilton meets Aaron Burr, John Laurens, Marquis de Lafayette, and Hercules Mulligan, and impresses them with his rhetorical skills. They affirm their revolutionary goals to each other.

The climax of the performance sees Hamilton’s death after an exchange of gunshots. The close of the musical is a reflection on historical memory.

Lilly Alfonso off to Egypt