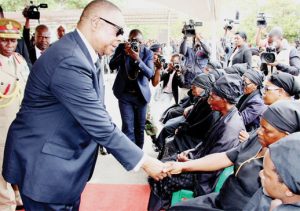 People could not hold their emotions. While some wept, others were seen standing with grief clearly registered on their faces as coffins carrying the remains of the soldiers were being taken out of the cargo section.

United Nations plane carrying the remains of the soldiers touched down at the airport around 12:00 o’clock in the afternoon.

“They [the six soldiers] have died for peace. They wanted peace. This is a painful day for us as a nation. It is more painful to die for peace than to die for war,” Mutharika said.

Mutharika consoled the bereaved families for the loss of their relatives.

The president commended MDF soldiers for their behaviour whenever they go for peace-keeping.

“Continue fighting for peace. I would like to commend the MDF for being exemplary when they go for peacekeeping missions,” he said.

Second-in-Command of the Malawi Battalion in the DRC, Masozi Kayira, said the soldiers were killed in a fight against the Allied Defence Force (ADF).

“We started off at around 5:00 hours on 13th November. There was an exchange of fire with the ADF. We stopped at a camp used by FARDC [The Armed Forces of the Democratic Republic of the Congo]. The ADF continued following us. Though we managed to withdraw to our operation base, we lost our soldiers,” Kayira said.

The soldiers were under United Nations Organisation Stabilisation Mission in the DRC.

“These heroes that we are welcoming today and seeing off to the final resting places were young and full of life. They had so much to offer to their families, yet they went to the DRC, for what they felt was noble. We, their comrades, in arms, praise them for their heroism,” Supuni Phiri said.

He had a special message to the fallen soldiers: “You will always remain special in our hearts and memories. You shall not be forgotten but forever remain in our hearts.”

He also urged the soldiers still in the DRC to continue their work.

“To those in DRC, soldier on and do not retreat. Continue putting up a good fight for the greater good of humanity,” he said.

MDF spokesperson, Paul Chiphwanya told the grief-stricken gathering that one of the soldiers, Chitete, was shot dead as he was trying to save the life of a Tanzanian soldier. He said the soldier who was saved was in hospital in Uganda.

Chitete’s widow, said she is worried on how she will take care of their three children.

“We have three children. Our last born child was born three weeks while he was in DRC. I am worried about how I will take care of these children,” she said.

Kachemwe’s widow, Melia, said she was shocked to hear that her husband was one of the soldiers killed, as they had talked a day before the incident.

“I didn’t believe that my husband could be one of them. A day before, we spoke and he told me that things were not well in DRC, but he assured me that he was safe,” she said.

Kambalame’s widow, Elina also talked to her husband a day before she received the message about the tragedy.

UN Resident Coordinator, Maria Jose Torres described the deaths as “unprecedented tragedy for Malawi”. She also described the soldiers as brave as they had lost their lives for the sake of peace.

“The UN Secretary General and the Security Council have said this attack is actually a war crime and called for all armed groups to disband and cease all forms of violence. The UN Secretary General has also asked the Congolese officials to continue taking necessary measures to bring to justice the perpetrators of this attack. I know there is currently a Commission of Inquiry within the UN to get what actually happened,” she said.