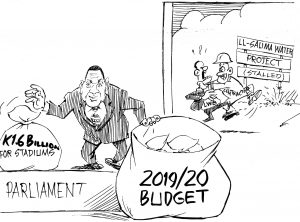 Members of Parliament (MPs) are in clusters scrutinising the K1.7 trillion national budget which Finance Minister Joseph Mwanamvekha tabled before the august House.

Among other things, the budget raises salaries for civil servants at an average of 10 to 15 percent, increases Paye free band to K45,000 from K35,000 and virtually every big vote of education, agriculture and health has seen a raise bigger than the previous year.

Education has been given the biggest vote at K172 billion up from K142 billion while agriculture is second at K167 billion and health at K101 billion.

The Farm Input Subsidy Programme, which is obviously part of the agriculture vote, is at K35.5 billion targeting 900,000 beneficiaries down from K42 billion last year

Among the projects that the government wants to implement include building of new teacher training colleges in Mchinji, Rumphi and Chikwawa as well as military hospital in Lilongwe, Blantyre District Hospital, a referral hospital in Balaka and a community hospital in Mponela.

Other highlights include the minister’s proposals that the government spends K1.6 billion on building two stadiums for Nyasa Big Bullets and Be Forward Wanderers, two of the most successful teams supported by not only fans from Blantyre but throughout the country including the deepest rural areas in Malawi.

In other developments this week on the national scene, Human Rights Defenders Coalition (HRDC) held demonstrations against Justice Jane Ansah after the expiry of a 14-day moratorium which Attorney General (AG) Kalekeni Kaphale obtained against the protests.

The AG was not happy with HRDC’s move, arguing the coalition had rushed to set dates for their next demonstrations when the two sides had not met some of the conditions the Supreme Court set when it ordered the 14-day moratorium, adding the two sides are yet to present to court a document highlighting issues they agreed upon during the last engagement at United Nations Development Programme offices in Lilongwe.

The demos went ahead on the same day that President Peter Mutharika was flying out to New York for the United Nations General Assembly.

A national budget is a national economic roadmap that lays out the strategic development direction the government wants to take for the sake of the country.

The key word is ‘national’ and that is why you see the budget attempting to talk about teachers’ training colleges in all the three regions, hospitals and roads that span from region to region based on the need and relevance to national development.

The present budget is being debated in Parliament at a time the country is so polarised that this week saw another massive pouring of some Malawians into the streets to protest against the continued stay in office of Ansah as Malawi Electoral Commission Chairperson.

The challenge against the victory of President Peter Mutharika is currently raging in the Constitutional Court in Lilongwe.

A clever government can even use the budget as a tool of showing goodwill even to the parts of the country where it is not popular by doing away with talk points in the budget that people do not agree with.

The biggest controversy so far is the K1.6 billion put in the budget for the construction of two stadiums for Nyasa Big Bullets and Be Forward Wanderers which some citizens regard as an anomaly for the simple reason that the two clubs, with the largest following on the land, remain private entities.

Mutharika has done well to keep his electoral promise made at the height of the elections campaign – that he would build stadia for the two clubs but he is wrong on how he intends to do it by using taxpayers’ money.

It is not just wrong because what he intends to do is legally questionable but it is morally wrong for the President to imagine that he can take money paid into the national kitty by all Malawians, some who do not give a damn about football and others that are poor, and give it to two rich private companies.

Mwanamvekha, in the budget statement, has pinpointed many national projects he wants to undertake and are very vital to Malawians across the political divide and regions.

There are roads that intersect the country such as M1 and M8 that are mentioned in the budget as well as hospitals such as the military one in Lilongwe and a referral one in Balaka, all necessary national projects that must be done in the name of national unity.

But there is a project that has not even deserved a mention in the budget, yet it came with all sorts of razzmatazz: Salima-Lilongwe Waterway Project.

This is a project which government signed for and the nation discussed it at length even in courts.

Today there is a mess that surrounds it, with Lilongwe Water (LWB) Board made to pay $17 million dollars (K13 billion) to the contractor for the initial mobilisation works.

Sadly, now the government seems no longer interested in it while LWB is struggling to pay a commercial loan that was forced on it by the system.

The contractor, Khato Civils, is all guns blazing and demanding a whopping $71 million dollars (K57 billion) in compensation.

The Finance minister should have given a word about this in the budget.

This is because, no matter how government feels about this project, whether it agrees with those who said K300 billion was just too expensive for the project, the minister still needed to report to Malawians as regards the next course of action.

Blantyre will soon have all the water it needs from Mulanje Mountain.

There have been a couple of water projects up North too.

It is only Lilongwe, the seat of the government where UN system, embassies, top NGOs reside, which is still dry but with a growing population as a city on the move.

If the government has alternatives to the Salima- Lilongwe Waterway Project, then Mwanamvekha should have brought them to the attention of the House and the nation.

In all fairness, the budget Mwanamvekha tabled on Monday last week is good but it can be made better if MPs currently scrutinising it do their job to remove the impurities of building stadiums for private entities, think about allocations such as Fisp and force the government to account for glaring omissions such as the Salima—Lilongwe Waterway Project.