Within five months, 16 teen mothers, who dropped out of school, have raised over K202, 000 from their Village Savings and Loan (VSL) group popularly known as Banki Nkhonde.

And they are not yet done.

Empowered by their savings, the mothers are determined to resist the temptation of men who lure them with money leading to unplanned pregnancies.

It is a typical case of once beaten twice shy for the girls who are members of Tiyanjane Girls Club of Fowo and Mwanjati 2 villages, Traditional Authority Namavi in Mangochi District.

“Almost everyone from our group has a child or two. Some dropped out of primary school while others reached secondary school but did not complete. However, we do not want to condemn our lives for good. We want to make a difference to our lives,” 22-year-old Christina Lloyd, who is the club’s chairperson, says.

Christina says she was forced out of school by a man who promised to marry her. However, after impregnating her, the man left for South Africa.

Since that time, Christina has never heard from the man and all the promises of a good married life were gone with him.

Christina’s life changed for the worse. She was left with an extra mouth to feed.

“After struggling for a long time, I was approached by one of the social workers who advised me to join a girls club which receives support from Yoneco [Youth Net and Counselling]. From the meetings, we learnt that we needed to stand up and make things work for ourselves. We messed up our lives and it is our responsibility to correct things,” she says.

Using wages from piece work such as farming and selling firewood, the girls formed a VSL to save and borrow money for small scale businesses they engage in.

Using money from the loans, some of the girls have returned to school as they are able to support themselves.

Other girls have gone into full-time small scale business such as selling mandasi, popcorn and sugar cane.

Few of them have bought livestock such goats and chicken. That is the case with Hawa Juwawo who has bought two goats.

And from personal experiences, some of the girls have found business opportunities of making and selling reusable sanitary pads within their communities.

“From the money I borrow from the group, I have acquired skills in hair dressing. I am able to make money to support myself and my child,” 19-year-old Joyce Amadu from Fowo Village, T/A Namavi, says.

It is more encouraging to see that the girls are dreaming big.

The club is even dreaming bigger—they want to buy a piece of land for them to engage in commercial farming.

“Most of the land along the lake is taken. We believe that with farming we can make a lot of money because farming is something which most of us already do. So we would have loved if we got land especially suitable for winter cropping,” Juwawo says.

T/A Namavi says although girls are still being enticed by men such cases are declining.

He says the coming in of the girls clubs which are engaging in savings and loans has empowered girls economically.

“In the village set up, girls need support from men. Mostly the support comes in the form of tablets of soap, clothes, body lotion and food. But I am happy that girls who are able to find their own money are now able to resist men’s advances,” he says.

In most villages in Mangochi, it is very difficult to find a girl who completed secondary education.

School authorities say that about 80 percent of girls that enroll in primary school in Mangochi never reach secondary school.

On the other hand, only 16 percent of those that reach secondary school are able to complete their studies.

Reasons for high dropout rate among girls include poverty, teen marriages, early pregnancies and lack of parental support as most men in the district migrate to South Africa, leaving their children with their mothers only.

In addition, distance between schools has been cited as another major challenge that limits access to education in the district.

During the 2018/2019 Primary Scholl Leaving Certificate of Education (PSLC) examinations list of best performers, Mangochi was on number 25 out of 28 districts.

This speaks volume of how the district is struggling to reverse the trends in the sector. This is not withstanding the efforts which education authorities and key stakeholders are making in the district.

The situation on secondary school education is not different as girls continue to drop out of school without completing secondary.

During the recently released Malawi School Certificate of Education examinations, there are some schools such as Mdinde Community Day Secondary School which did not register a single pass among girls.

This is despite the support which some girls in the district receive in the form of bursaries and school materials such as uniforms and bicycles.

“Sometimes, we miss a point in terms of how to assist girls’ education. Most of the girls who are returning to school have children at home. It is very hard for them to concentrate on education when they know that their children are suffering at home. The best way to go about it is to empower the girls economically so that they can support their children as well. This can also improve their performance in school,” Namavi says.

Yoneco is among organisations which are assisting girls in and out of school in T/A’s Makanjira and Katuli.

Charles Mbeba, Project officer for More Than Brides (MTB), a project which has been implemented in the past three years with support from a Netherlands-based organisation called Simavi, says they are happy that now there is more awareness that marriage is not children.

“Initially, it was difficult to prove to people here that girls need to remain in school because to them early marriages were part of their culture. But using testimonies by girls from within the area, we have created a community which is willing to allow girls to grow into women before they get married,” Mbeba says.

Mbeba says MTB seeks to empower the out-of-school girls economically so that they can inspire other girls to remain in school.

He says baseline studies have shown that girls who come from a poor background are often abused by men than those who are able to get some basic needs.

“So the VSLs are part of the economic empowerment for the girls so that they can resist temptations from men. However, we have noted that there is need to build their capacity so that they can manage their businesses. Another area is that of vocation training which we believe can completely empower them,” he says.

Mbeba says about 180 girls have been rescued from marriages since the introduction of MTB project in T/As Makanjira and Namavi.

Some of the girls have returned to school, while some such as Christina and Hawa have resorted to follow the path of economic independence through VSL.

Mponda optimistic ahead of Cosafa U-20

Why development plans under-perform in Malawi?

What’s in the Sadc deals? 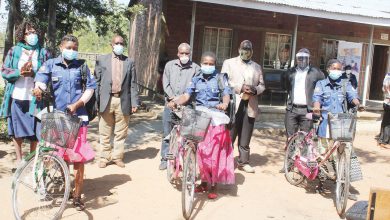 The hidden bitter side of Covid-19