The United States (US) Ambassador to Malawi, Robert Scott, has said political party leaders should prepare themselves to respect the rule of law by refraining from violence once the Constitutional Court determination on the landmark presidential elections case is out in Lilongwe.

Scott said the leaders should also prepare their supporters to move on in case the court determination favours their opponent.

He was speaking in Mzuzu on Monday when he visited America Corner of Mzuzu University (Mzuni) where he donated computers, a projector and books.

Scott said failing to accept the court outcome could affect the country in as far development is concerned.

“It is a simple message: Respect the rule of law, and that will be of great benefit. Leaders are responsible to ensure that those who follow them have the message of respecting the ruling from the court. Do not indulge in violent activities in reaction to the verdict and I think that is the important thing right now,” Scott said.

He believes that because the court hearing was transparent as it was aired live on radio and television stations, Malawians would respond to the ruling positively.

A panel of judges, Healey Potani, Ivy Kamanga, Mike Tembo, Dingiswayo Madise and Redson Kapindu, are expected to deliver a verdict within 45 days from December 21 2019 when all parties finished making their submissions.

In the case, Malawi Congress Party President Lazarus Chakwera and UTM leader Saulos Chilima are challenging the May 21 presidential election results saying they were marred by irregularities.

Commenting on the donation to Mzuni, Scott said the US government will continue supporting the faculties of nursing and humanities, apart from the American Corner which supports students at the university and others from primary, secondary schools and communities surrounding the campus.

Mzuni Vice-Chancellor, John Saka, commended the American government for the support to the institution.

“As a higher education institution, we also work with the community. This American Corner serves both students and communities because it is furnished with books and good computers. Therefore, we commend America people through the Embassy for supporting the institution,” Saka said.

Mzuni uses a makeshift library as the original was gutted down by fire in 2015 where over 50,000 books and 100 computers were destroyed. 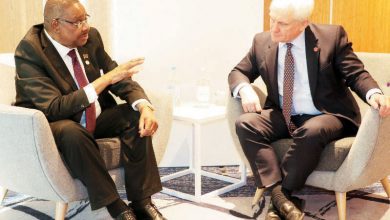