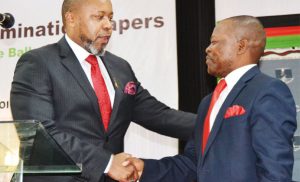 UTM presidential candidate, who is also State Vice-President Saulos Chilima, was the centre of attraction when he drove a tractor after presenting his nomination papers to Malawi Electoral Commission (Mec) at Chichiri International Conference Centre in Blantyre Wednesday.

Chilima came to the venue in a red twin cab.

Spotting a black suit, white shirt and red neck-tie, Chilima took to the podium and announced that Michael Usi is his running mate in the May 21 Tripartite Elections.

Chilima presented the nomination papers a few days after refusing to give the running mate position to People’s Party (PP), claiming it was against the party’s constitution to give the position to an outsider.

Frustrated by the move, PP unceremoniously withdrew from the alliance, which lasted for three days.

In a sudden twist of events, PP endorsed former president, Joyce Banda, as its presidential candidate despite her earlier announcement that she would not contest in the election, citing old age and years of tireless service to Malawi.

Banda submitted her nominations on Tuesday.

In his salutations, the UTM leader exuded confidence, to the extent of addressing his wife, Mary as “the First Lady in waiting”, to send the jam-packed hall into stitches.

Chilima also cautioned the people to vote wisely on May 21 because five years can change the country’s fortunes drastically.

“Me and Usi appreciate the huge task ahead of us; we are ready to serve Malawians… Whenever you see us, you are seeing a new Malawi,” he said.

Chilima said time had come for youthful leaders to take over the reins of power.

“We cannot develop using the old ways. We should stop looking at ourselves basing on region and tribes because, if you go to Phalombe, you see men and women facing the same problems which are in Dedza,” he said.

When leaving the venue, he took to the steering wheel of a tractor, with Usi sitting on his left hand— both clad in red helmets— driving from the venue to Chichiri Round-about as it rained cats and dogs.

By the time they disembarked from the vehicle, they were soaked to the bone.

Their followers were equally relentless, dancing in the rain on a convoy of open lorries, minibuses and other vehicles, including those of the Vice-President’s security detail.

Before Chilima and Usi made it to the venue, drizzles, that started at around 07:45am and dissipated at around 10:50am, threatened to disrupt activities outside the venue.

Mec says no to Ras Chikomeni