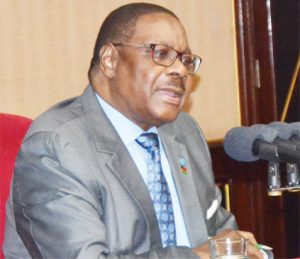 Sculptor Jean Doyle of Jean Doyle Artworks has said she did a perfect job on the statue of Malawi’s third president Bingu wa Mutharika.

When pictures of the statue appeared on social media Thursday, there were reservations by some quarters, who argued that the statue does not look like that of Bingu.

“I did it from photographs of the [former] president. I spoke to his daughter Duwa, and she gave me a lot of information and I have done it as perfectly as I possibly can,” she said.

Bingu died on April 5 2012 and Friday, when his statue was commissioned at Parliament Building in Lilongwe, marked exactly seven years since his death.

During the function, President Peter Mutharika said Bingu deserves to be honoured for the contribution he made to the country.

The President described Bingu as a leader who inspired the nation to be ambitious.

“Bingu told us to dream in colour. In Bingu, we celebrate an African statesman who urged Africa to turn its resources into wealth. His African food-basket dream inspired many Africans,” he said.

Government officials, diplomats, family members and many other people were in attendance but former first lady Callista Mutharika was not present at the ceremony.

Minister of Civic Education and Culture, Everton Chimulirenji, said the place of Bingu in the country’s history needs no emphasis.

He said his ministry, which ensures the preservation of culture in the country, is happy that Bingu’s statue has been erected.

Family member, Arthur Masamba, said they are happy with the statue being erected at parliament building, saying generations to come will continue remembering Bingu.