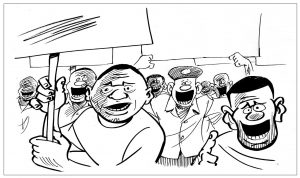 In recent weeks, the country has witnessed a number of protests, largely triggered by the astronomical rise in the cost of living, regardless of the fact that the earnings of most people have remained stagnant for months if not years.

This is why a number of people, led by politician-cum-comedian Bon Kalindo, have not only taken to the streets lately but equally petitioned the authorities to tame the yoke that is before Malawians and is making their lives uncomfortable.

The rest aside, only someone living in an ivory tower would be blinded to the fact that life has become unbearable for the majority. This is driven by the sharp rise in prices of essential goods and services such as fuel, housing rentals, cooking oil and water.

It might be only a handful of people participating in these protests but one thing I can say, just by deducing from the prevailing climate, is that a lot of people resonate with the cause and it would be utter foolery for Capital Hill to try and dismiss such a bunch.

Which perhaps best explains why government moved in quickly to meet with some of those behind the demonstrations, including Kalindo, to see how they can work together to address the challenges that have been singled out. For starters, we have seen President Lazarus Chakwera putting the brakes on his frequent travels and immediately after the meeting between a delegation of Cabinet ministers and Kalindo, the government announced a reduction in gate fees that motorists are paying at Chingeni Toll Plaza in Ntcheu District.

But then, as others have observed, it is only those privileged to own or drive a vehicle that have benefitted from this gesture while the major changes people are yearning for are yet to be addressed.

It should not take people marching on the streets for government to bring about change that the public anticipates, in line with some of the promises that the Tonse Alliance-led government made prior to assuming power. There should be that constant rapport whereby government should share with Malawians what its game plan is, in as far as curbing the economic problems that are rocking people’s lives is concerned.

When people take to the streets and end up causing disturbances, like we witnessed in Blantyre and Lilongwe, it still comes back to haunt ordinary individuals whose taxes will now be diverted towards footing the bill for repairing the damage caused.

Much as President Chakwera has said on a number of occasions that every person must fend for themselves and stop looking up to him and government, the government has that obligation of seeing to it that people are not being unnecessarily hurt, whether by taxes or exorbitant prices of goods.

So next time you see people wondering about aimlessly or indeed staging a protest, as witnessed over the past two weeks, do not be quick to dismiss them as just another bother, try to see beyond that action… some of them might have nowhere else to turn to, having had a chunk of their money taken by taxes and the rest committed to rentals and other necessities whose prices have shot through the roof.

Getting back to senses

Word has it that the opposition Democratic Progressive Party (DPP), after being snubbed by the courts over its bid to have results of the June 23 2020 presidential election and those of legislators and ward councillors annulled, has decided against contesting the verdict at the Supreme Court of Appeal and will instead focus its energy on playing its rightful role of providing checks and balances to government.

It is sad that it had to take such an embarrassing loss in court for the former ruling party to grasp the reality that its house is not in order and it needed to punch the reset button as it has rightly done.

We must hand it to the ‘political engineer’ former president Bakili Muluzi for kick-starting the process of bringing DPP back to reality when he urged the party’s president Peter Mutharika to put the house in order.

Otherwise, kudos to the party for getting back to its senses.