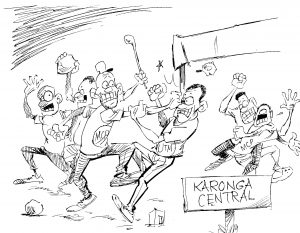 The development made chairperson of the team, Paul Kalilombe who is also District Commissioner for Karonga to issue a stern warning to report the two parties to the Malawi Electoral Commission (Mec) for action if the trend continues.

Now, in case, you have just jetted into the country, let me fill you in.

MCP and UTM are the main parties in the Tonse Alliance government.

MCP president Dr Lazarus Chakwera led the alliance as its presidential candidate and won the fresh presidential election on June 23, propelling him into the State House.

UTM president Saulos Chilima, on the other hand, was running mate to Chakwera and the win on June 23 made him retain the office of the Vice President of this country.

All this was a result of what the two of them did in challenging Peter Mutharika’s win in the 2019 presidential elections when they claimed massive irregularities and the courts agreed with them.

In that 2019 election, Chakwera polled 35 per cent of the total national vote trailing Mutharika who won the discredited election with 38 per cent.

Chilima, on the other had 20 per cent.

As Chakwera and Chilima sat on that hardwood bench at Lilongwe High Court premises during the tumultuous eight months of the court battle, they must have ‘conspired’ that the only way to assure themselves of victory against Peter Mutharika, especially in light of the new definition of the word majority in the Constitution, was to team up and feature one of them.

Other six parties joined them making the Tonse Alliance formidable and unstoppable.

They won together on June 23.

I would have thought as mature politicians, the alliance that began getting cobbled up as they fought a common enemy would be all encompassing and would think through issues including how the grouping would approach by-elections.

But nay! Here we are again with a different context and circumstances of electoral violence in Karonga Central Constituency.

There is something special and beautiful with Karonga Central Constituency that unfortunately in the end becomes ugly.

The electoral competition in Karonga Central Constituency is always close and healthy. That is why during the past four elections Frank Mwenifumbo and the late Dr Cornelius Mwalwanda were simply taking turns as Member of Parliament but at the huge cost of violence.

During last year’s parliamentary elections, the difference in the number of votes between the two men was about 100.

Yet this time there is a twist in the tale after the death of Mwalwanda.

The Officer-in-Charge of Karonga Police, Sam Nkhwazi, says Karonga Central Constituency has registered eight political violence cases so far where a total of 12 people were assaulted.

The interesting aspect is that those assaulted supporters are evenly distributed at six each between those that support MCP and those belonging to UTM parties who are supposed to be bedfellows in the Tonse Alliance government.

As expected, both MCP candidate Leonard Mwalwanda and UTM man Frank Mwenifumbo are feigning innocence and they expect that Malawians will smile at such blatant dishonesty.

There are other candidates competing in the Karonga Central Constituency by-election such as Florence Nthakomwa who is running as an independent after being frustrated in UTM; Nellie Sichali of Mbakuwaku Movement for Development and Democratic Progressive Party’s (DPP) Ernest Mwalughali.

All these are quiet and it is Mwalwanda and Mwenifumbo who are grabbing the headlines, all for wrong reasons.

I wonder where things went wrong between the party of the President of the Republic and another for the Vice President that on the ground in Karonga things should be different.

Was it not obvious that there should have been a deal where probably they had agreed that only a partner with the sitting MP in a particular constituency should feature a candidate in case of a by election?

At the end of the day both MCP and UTM plus the whole Tonse Alliance want numerical advantage in Parliament and there is no difference that can accrue as a result of the origin of the MP or whose party he or she belongs to.

It seems the issue is about pride, with eyes strategically firm on 2025 although Chilima told us all to change our mindset and stop obsessing and fussing about that election.

Certainly the fighting in Karonga is going to affect the alliance in a bad way by bringing the unnecessary tension in government, appreciating fully that in campaigns, bitter words are exchanged by the same characters that would be meeting in Cabinet.

It is not practical and it does not make sense.

This is possibly the reason why both President Lazarus Chakwera and Vice President Saulos Chilima have largely shunned the campaign especially in Karonga and there is symbolism to it.

Clearly they do not want the public to wrongly read what they would have been saying at rallies.

I wonder why the two did not cascade the same to the ground to stop the senseless competition in Karonga that should have not been at all.