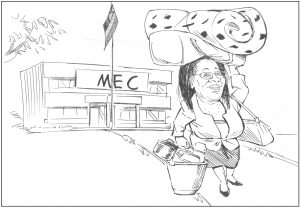 If you asked President Peter Mutharika what legacy former chairperson of the Malawi Electoral Commission (Mec) Justice Jane Ansah has left after her resignation, he would obviously be profuse in singing her praises.

In fact, the President did exactly that by heaping adulation on Ansah as a distinguished Malawian patriot who has served the country well and wished her all the best in her future endeavours.

But others, such as Human Rights Defenders Coalition (HRDC), would be less warm and not generous to Ansah, after being on the streets for over twelve good months rallying for her ouster, insisting she had messed the May 21 elections last year and she had to go.

HRDC added that while it welcomed her resignation, both the Constitutional Court and Supreme Court found the whole commission incompetent and as such, all the other commissioners had to go as well.

This cannot be faulted because it does not make sense to see only the back of Ansah while the other commissioners are still intact until June 5 when their contracts expire; all because they are waiting to be handed the keys of the VXs and TXs as golden hand shake from Malawians for a job badly done.

That is all the commissioners are waiting for.

And it is all reflective in the arrogance they are displaying publicly as they shamelessly scoff at the court, including the highest in the land, the Supreme one.

Mec commissioners such as Linda Kunje and Jean Mathanga have been downright arrogant and rude, rejecting the judgment of the court that they are incompetent, placing their egos in front against the rule of law as the judgment is very clear that Mec handled the election incompetently.

And Ansah and her commissioners still retain the support from the State House.

The reality of the matter is it is only the President and his Democratic People’s Party (DPP) following who can see that Ansah and her commission has left a positive legacy on the public in Malawi while the rest of us see them as a bunch of incompetent jokers and the courts have validated this view.

But I understand the President’s position. He still believes he won last year’s election which Ansah presided over and he is literally being dragged by the neck to another election which he must face by July 2 otherwise he will wake up without the mandate to govern Malawians by July 3.

Ansah is finally gone and she wanted to create an impression she is doing so on her own terms, insisting she threw in the white towel only after the Supreme Court judgment that also found the Malawi Electoral Commission she headed as incompetent.

She said the HRDC demos did not move her a bit, claiming protests were an embodiment of lawlessness which she could not pander to, thereby delivering the last cheap shot at a body which has known one language against her that she needed to go.

In fact, Ansah went a step further to say her health has never been better and that she does not suffer any health problems such as high blood pressure as a result of the high pressure job.

Summed into totality, Ansah resigned badly and is not contrite to accept responsibility for the fiasco that was last year’s elections.

The diagnoses and judgments by both top courts were thorough and merciless and the verdict was that last year was a mess.

Look at how the country has paid dearly and is still paying, with Malawians suffering job losses as a result of the country that has been on economic lockdown since last year due to the political instability brought about by the botched polls.

That is why the reaction of many Malawians to Ansah’s resignation was one of caution until Mutharika accepted her resignation on Friday.

It is a sure sign that Malawians have lost trust in this administration and suspicious of anything that comes from its mouth.

Malawians are still worried at the slow pace of picking the new commission which involves parties nominating their representatives and then having the election in about a month.

They are wondering whether this election is doable within the deadlines set by both courts and are cast in stone.

Then put in the picture the parting shot of Ansah who said Parliament should set the date and recommended June 23 when she herself was initially talking of July 2, a day before the expiry of the 150 days set by the Constitutional Court.

All the chaos and uncertainty are a serious cause of concern regarding the future of this country and its wellbeing.

The State House insisted this week that there will be a new commission by June 5 when the contracts of the present Malawi Electoral Commissioners expire.

The question that still lingers is; why not now and today?

Meanwhile, the campaign has reached fever pitch with parties criss-crossing the nation, drawing huge crowds signalling that Malawians have warmed up to the process.

The question should be; are the voters getting value from the campaign promises or they have already made up their mind on who to vote for based on other considerations?

As I write this, the President is still absent and his running mate, Atupele Muluzi is still bearing the burden of campaign which has provided fodder to Tonse Alliance for vicious attacks, with its candidate Lazarus Chakwera even challenging the absent Mutharika to a debate which we know will not happen.

I am sure the supporters of DPP/UDF alliance are getting worried and agitated with Mutharika’s absence and would like to see him on the campaign trail to stop tongues from wagging.

Otherwise, one obstacle to free and fair election has been removed.

Take counsel of the wise

USSD or app; which is better mobile money conduit?