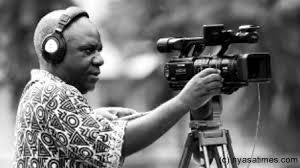 [dropcap]M[/dropcap]alawian filmmaker, Charles Shemu Joyah, on Saturday made history when he won his movie, The Road to Sunrise, won the Best Movie –Southern Africa category during the 2018 Africa Magic Viewers Choice Awards (AMVCAs) held in Nigeria.

Joyah’s The Road to Sunrise outclassed four other films including Nyasaland by compatriot Joyce Mhango Chavula.

The other films are Descent by Awal Abdulfatai, Salute by Philippe Talavera and Jomako Black Democracy by Abraham Kabwe.

It was not the first time for Malawi to win this award as the first recipient was Chavula in 2016 with her film Lilongwe.

Joyah, who has also won awards with his two other movies Seasons of a Life and The Last Fishing Boat, said Sunday, he was not sure of winning the award.

“Frankly speaking I was not sure that we would win for I had watched the trailers of the films we were competing with on YouTube and the quality was amazing. So I was over the moon when the film was announced winner,” Joyah said.

He said the quality of African films is getting better every day.

Joyah, who returns home today, said the exposure the platform has offered is immense and that he hopes to see this “benefit us in our attempt to get better distribution for our film”.

“We want to start screening the film this month and shortly we will announce the schedule starting with Lilongwe,” he said

The Road to Sunrise was also nominated in the category of Best Overall Movie but it failed to grab the award which went to 18 Hours by Phoebe Ruguru.

The other Malawian films nominated in Amaa are Chavula’s Nyasaland and Flora Suya’s My Mother’s Story.

Chavula, who failed to win an award this time, congratulated Joyah for the award.

“I am excited for Joyah because it has gone to Malawi and the fact that I was part of the film during casting stage makes it even sweeter.

“This year’s AMVCAs had many great films just looking at the list of nominees and it’s so humbling to have been one of them,” she said.

Chavula said Malawi was well represented but was quick to say that there is need to up the game if “we are to come back next year”.

“Nyasaland will continue its festival rounds for now before its put on the market and that may take a while,” she said.

Held at Eko Hotel and Suites in Lagos, the red carpet event which was beamed live on Africa Magic attracted several players in the film industry.

There were 27 categories in total.