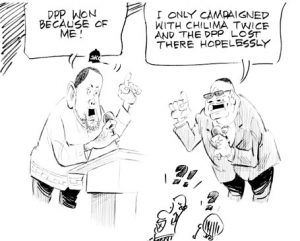 At the rate, as a country, we are going heading for an important election, all election the issues we are supposed to get from the competitors to decide our vote come May 21 will be drowned in a sea of vitriol being spewed every day in the name of electioneering.

I say this because the two weeks gone by have been eventful, with the Cabinet reshuffle spin-offs still making big headlines, especially the appointment of DPP regional governor for the South Charles Mchacha as Deputy Minister of Homeland Security.

Women Lawyers Association of Malawi presented a petition to the Office of the President and Cabinet (OPC), asking President Peter Mutharika to fire Mchacha, arguing he should not be rewarded with a Cabinet post after he insulted female members of UTM as prostitutes during a rally DPP vice-president Kondwani Nankhumwa addressed in Ndirande.

This has been followed up with more petitions delivered against composition of the Cabinet and Mchacha.

But the President, speaking during a whistle-stop tour in Kasungu on his way to Mzuzu, said Chilima came into the fold only two months to the elections, arguing DPP won because it laid proper groundwork ahead of the polls.

APM said Chilima was among 15 possible candidates for the running mate spot, claiming after the Vice-President heard about it, he came to the President’s house uninvited but that he refused to see him. He added that the two only campaigned together two times in Mchinji and Lilongwe where DPP lost hopelessly.

Now this fire has caught on in the party with loudmouths such as secretary general Griezedar Jeffrey calling the Vice-President silly in Nkhata Bay for saying DPP won because of him.

To some, this exchange of salvoes between the President and his Vice about events of their pairing in 2014 might make interesting hearing.

It probably lays bare some of the machinations parties go through in coming up with running mates leading to elections.

No wonder, audiences both in Dedza and Kasungu were clapping hands.

It is clear that the duo has different versions of events prior to them being on the DPP ticket.

Probably one of them is lying, if not both.

I mean, the two have fallen out and are now fighting for one trophy, which is the key for the State House. Each of them is, therefore, trying to exact as much political capital out of it as possible.

But the question that the two should ask themselves is: What is the take-home message for Malawians from their exchange of words?

Is this the campaign that Malawians want and what will be the impact of the exchange of salvoes on challenges such as poverty, lack of jobs, poor infrastructural development, uncontrollable corruption and all the evils that they meet as they live under grinding poverty in Mtopwa, Ndirande, Senti, Zolozolo or Chiputula.

All this is complicated by Malawi politics which is littered with party hit men that specialise in spewing vitriol during rallies.

The history of multiparty politics has names such as the late Charles Kamphulusa, Maurice Kachimbwinda and Davis Kapito who specialised in the art of castigating others at political rallies.

Today, we have the same in political parties and names such as Mchacha, Dave Saopa and other regional governors fit into this description as they lampoon and say dirty things about others.

Sadly, by keeping silent, the leaders tacitly support the volleys of abuses their followers send to others.

Yet, in the end, the vitriol spewed by these hit men creates problems for the leaders as the Mchacha issue has clearly shown.

The women lawyers that are up-in-arms against Mchacha’s appointment represent the views of many Malawians who wondered how their President could reward someone who called some Malawian women names merely for belonging to a political party.

That is probably the reason the President could only respond to those who accused him of hiring only three women Cabinet ministers, saying he has promoted women into other positions and accused CSOs and private sector players of being hypocritical with the attacks.

He could not respond to accusations on Mchacha probably because he knows his accusers who presented a petition to his OPC are right.

Do politicians really think Malawians of the 21st century would vote for them because they are engaging in a mudslinging match?

While political banter is allowed, calling somebody demeaning names is frowned upon as the world is moving towards respect for women so that they can enjoy their full rights and ensure that their full potential is unleashed.

The belief is that only societies that do not leave anybody behind will develop and this is the reason we have initiatives such as the 50- 50 campaign.

Political leaders in the name of APM, Lazarus Chakwera, Chilima, JB and others should do Malawians a favour and it is to stop the vitriol that has engulfed our political scene.

Malawians did not call for a shouting match to be staged on May 21 2019 but an election as they look for an improvement in their lives to take them out of excruciating poverty.

I do not know how shouting at each other can achieve this. It is also boring.