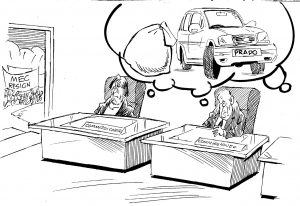 For Malawians who wondered why Malawi Electoral Commission (Mec) commissioners are sticking to their positions despite the Constitutional Court in Lilongwe last week nullifying the May 21 2019 presidential results on the basis of what it described as widespread, systematic and grave irregularities, the answers came this week in loads and buckets.

In total compliance with the ruling of the court to take a look at the commissioners with a view to trigger a process of their removal, the Public Appointments Committee of Parliament this week has been meeting the men and women who managed the disastrous May 21 elections.

Courtesy of live radio broadcasts, we were able to follow the interaction and yes, it confirmed our fears.

The five judges who annulled the elections in Lilongwe were spot on.

The May 21 election should not be allowed to stand because the legal processes that are in the electoral laws and Constitution were grossly flouted.

But it is more than what the court said that went wrong.

As we have seen this week, the people that were entrusted to run the election are not fit at all and most of them have no clue about the responsibility that was put on their shoulders and how they were supposed to go about it.

What came out very clearly is that despite the mess they caused to the May 21 election, something that the court found, some commissioners are still adamant and rude and are clinging to their imaginary belief that all went well.

While some such as Linda Kunje were outright rude as she went about defending the indefensible, others such as Mary Nkosi were very straightforward in saying that with the fiasco that was the May 21 elections, they are ready to go but are waiting for their benefits, that include vehicles (yes top-of-the-range Toyota Prado VX courtesy of poor taxpayers) which are only payable at the end of their four-year term in four months’ time.

Despite the mess some such as Moffat Banda are too loyal to those that appointed them that we could see and hear the struggle in their voices not to put their foot wrong to displease their political masters while others such as Jean Mathanga were too smooth spoken with doubts written all over their faces about the truth behind what they were saying.

After all, why should Malawians trust what was coming from the mouth of the commissioners when the court has already spoken that this group is an incompetent one, replete with evidence?

But these commissioners can shout their voices until they crack; it will not change that they presided over a process marred with irregularities, forcing the court to declare it a nullity.

They can wait for their benefits or lie the whole day that they tried their best until cows come home, but no one should believe them.

Malawi must hold elections in five months time but the new polls cannot be presided over again by a bunch of rude and arrogant commissioners.

Malawians deserve a clean poll this time and the excitement has already started with the political wheeling and dealing already underway.

With the court ordering a fresh election within 150 days, Malawians are already discussing possible permutations and alliances.

Everyone was pleasantly and unpleasantly surprised, depending on which side they support when Malawi News shocked the nation on Saturday after reporting that UTM is ready to talk to anyone, including Democratic Progressive Party (DPP).

It started with warming up of relations between the supporters of the two parties on social media.

There is a maxim that says there are no permanent enemies in politics but I guess the shock was just too much for those who thought UTM can never have a dalliance with the same people they rudely called Apumbwa not long time ago.

What is baffling is that the alliance, that some Malawians thought was obvious and want to see between Malawi Congress Party (MCP) and UTM, to build on their unity displayed at court as petitioners in the constitutional case, seems not obvious after all and all wrong signs are there for all to see.

It is clear that there are all sorts of sticking points central of which, I suppose, is the issue of who would be a candidate and who would be a running mate between MCP president Lazarus Chakwera and UTM leader Saulos Chilima.

Eventually with all these problems and permutations, the question that only time will answer is: Shall we have alliances at all or what we will see is that all these parties will go into the presidential election on their own.

With the 50 plus 1 percent as a definition of majority as ruled by the Constitutional Court in Lilongwe, is Malawi poised to see a run-off if the ruling is upheld by the Supreme Court.

It is all exciting time ahead and this should not be dampened by a bunch of an incompetent committee of Mec commissioners who are merely waiting to walk away with shiny Prados courtesy of taxpayers’ money.

They are all beyond their sale-by-date. We need a new commission in place.