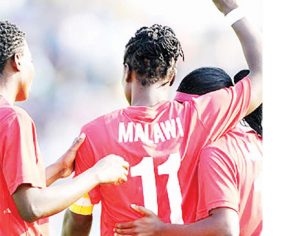 It was the same old story Monday as the Malawi national women’s football team bowed out of the 2018 Cosafa Women’s Championship after losing 6-0 to South Africa’s Banyana Banyana at Isaac Wolfson Stadium in Port Elizabeth, South Africa.

The She-Flames went into the game as underdogs and the hosts teased the visitors right from the first whistle.

For the better part of the game, Malawi kept chasing their own shadows as the hosts proved superior in many departments. The team sat too deep, allowing the hosts to pressurise them.

The hosts have advanced to the semi-finals as Group A winners with nine points and face Uganda, who topped Group C with seven points from three games.

It only took 10 minutes for South Africa to find the back of the net through Linda Motlhalo. Khanya Xesi grabbed Banyana Banyana’s second goal after 29 minutes in the first half.

Once again, Malawi’s defence failed to clear the ball from the danger zone, allowing Xesi to shoot straight into the net.

The She-Flames rarely threatened South Africa in the first half. Madina Ngulube got the only chance for Malawi but missed the target.

But it was too little, too late as South Africa scored two more goals to end the match as a no contest.

Chombo-Sadik was visibly heartbroken with the loss but said the team needs better preparations for next year’s event.

“The players did not perform according to my expectations. But we should have prepared better for this tournament. Congratulations to South Africa. They deserved the victory,” Chombo-Sadik said.

Malawi started the competition with a 2-0 loss to Botswana on Wednesday before recovering to beat Madagascar by the same margin on Friday.

Visa fees to be reduced