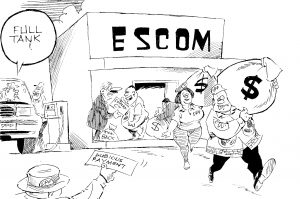 In one of his poems, ‘It’s the Speed That Matters, Dear Padre’ the legendary poet, Jack Mapanje doffs his hat for one Patrick O’Malley, a priest, who took a long walk to save the poet’s life.

Mapanje was incarcerated during the one party era and it needed people with international connections such as O’Malley to report human rights atrocities to bodies such as Amnesty International. Of course Mapanje was lucky to be a well-known and internationally published writer.

It is the speed of action of the likes of O’Malley that saved and served one of the finest writers of the land who some of us cherish for inspiring us.

Now let us talk about speed.

Since the heinous and corrupt Democratic Progressive Party (DPP) was booted out of government, there have been arrests that would not have been effected had the blue legion of scoundrels remained in power.

When one looks at the plunder of the country’s meagre resources by these people, one can easily have a feeling that Satan has more disciples than most people thought.

The reported loot and squander at Electricity Supply Corporation (Escom), Malawi Energy Regulatory Authority (Mera), Malawi Revenue Authority (MRA) and other government ministries, departments and agencies simply tell you how rotten this country has been.

And to think that these people, called the DPP, wanted to continue reigning is sickening. How, do you get the confidence to rule over people when you know you are a cult whose only skills are deceit, corruption, evil and all the devilish deeds in the dark book?

Now that we have some fresh air, and that we have the freedom to right the wrongs that had put us in manacles during the era of the DPP, we must now be honest with the current regime.

The Tonse Alliance is, until now, giving us some moment of fresh breath. I am a burnt child who knows what experience of heat is. Because of this, I will not be carried away by a step regime has so far taken.

I know, just as was the case in 1993, Malawians this year let out their anger in a decent way. Malawians are known for their longsuffering and the time between 2019 and the fresh elections results should be a good lesson to all those that govern us and those that will.

I must say, as I said earlier, that I have ambivalent feelings at the pace this Tonse Alliance-led government has taken.

I appreciate that a month and some days of running a government are not long enough to be a measure of a regime’s acumen, but signs are always there for all of us to see.

Being a pessimist that I have always been, I have already found the Tonse Alliance-led government lacking. It is making the same mistakes the past government led by the blue cult made.

For instance, I really do not think that we should be wasting money on familiarisation tours as what was happening and what is happening now. My understanding is that we pay technocrats in all ministries who are well versed in running ministries more than most politically-appointed people in the name of ministers.

This is pure wastage especially when you take a look that this country is staggering under the weight of the Covid-19. Good leadership worth its name would encourage people to be financially prudent and must rub that on others. This is not a season for spendthrifts.

Now that because we have spoken about spendthrifts and thieves, I must say that I am very interested in the way the current cases will go about people said to have been involved in the plunder of public resources.

They say, of course, that we all need justice and, as they say, justice delayed is justice denied. But to be honest, the Tonse Alliance-led government has no time, and as much as it cannot interfere with the judiciary, it has no luxury on its mandatory five-year term to take a chameleon pace because it’s the speed that matters.