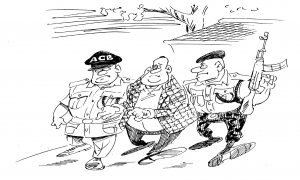 Just like many people in this country, I feel rotten to the core over the astounding revelations by the Chief Justice that some mortals, descendants of Homo Sapiens like the rest of us, lacked the moral fibre and accompanying patience to respect the parameters set by the judiciary in as far as the presidential election results case is concerned, up to the extent of attempting to bribe the five judges who have been handling the landmark case and are set to give ruling on the same in February.

What hurts the most is that some fool thinks he or she can make a mockery of the judicial system on a very delicate and pertinent matter such as the one before the Constitutional Court through sorry attempts of dangling huge sums of money in front of the judges; talk about spoiling the broth while the hungry are eagerly anticipating to eat.

This should serve as a wake-up call, not just to the authorities at Capital Hill but also to the Chief Justice himself, that though this particular bunch of judges might have resisted the bribery attempts, there could be some one or two bad apples in the judiciary that entertain such nonsense; how else could that senior official from one of the three arms of the government and the other from the private sector muster such courage as to approach the five judges handling the presidential election case? We have indeed thrown our morals to the dogs.

I will not get into the nitty-gritty of the complaint filed by the Chief Justice, which Anti-Corruption Bureau (ACB) Director General Reyneck Matemba took the liberty of walking us through during that ‘presser’ which the bureau decided to hold on Tuesday afternoon.

Now, let us reflect on that particular press conference, shall we? Going by what transpired, I am still failing to grasp exactly why the bureau decided to hold that presser in Lilongwe. Ordinarily, one might have anticipated that the ACB czar and entourage wanted to seize the moment and bring the public up to speed on what action they have undertaken since the moment that complaint from the Chief Justice (on behalf of the judges handling the presidential election results case) landed in Matemba’s in-tray. What we saw however was far from it and I believe I would not necessarily be going overboard if I were to describe the ACB presser as a missed opportunity. Look, what was the whole point of holding that press briefing? Much as I know it would have been a huge risk for ACB to name and shame the individuals behind the now infamous attempted bribery acts, it would not have been a bad idea to tell Malawians exactly where the bureau is in terms of investigating the matter and if arrests have yet been made or are imminent.

What was quite infuriating is the fact that we have witnessed such publicity stunts before. There was a time when the entire country was abuzz with news that some Cabinet ministers had been named in the infamous Cashgate and indeed that moment when President Peter Mutharika’s name was said to have been linked to the food ration scandal at the Malawi Police Service and indeed we saw the top tier within the governing Democratic Progressive Party sweating profusely as they went about town holding adhoc pressers; one of which is where party officials promised to surrender the money that was said to have been deposited in Mutharika’s account. And what did our good ACB head honcho do? He ‘danced’ all over the place with press conferences where he ‘exonerated’ the said individuals before even exhaustive investigations had been carried out. The bottom-line, in my view, is the press conference by the bureau should have waited until any meaningful inroads had been made or helpful information which was vital to share with the public had come about.

Okay, enough of my ‘whining’ and mopping about. I wait for the day when the bureau will call for a proper presser where earth-shattering revelations and information will be given out. As it stands, journalists were left grasping straws on that Tuesday afternoon.

My simple advice to Matemba and the ACB team is plain and simple: Learn to strike while the iron is hot whenever you seem to garner the public’s confidence. We are not saying you should ‘break’ the law and make frivolous arrests just to prove a point to those urging you on; far from it! But man, slow down on those inconsequential press briefings and focus on the investigations.

Otherwise, Malawians expect a speedy investigation by the bureau, of course at the taxpayers’ cost, and we can only hope nothing else jeopardises the much-awaited outcome of the presidential election results case.