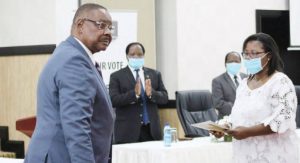 There is something not so peculiar about old people who have been hit by the unforgiving ailment of senility. They often refuse to accept that things have changed and that their power— physically and mentally—has waned.

It is only a few who accept that they can no longer be what they used to be. Most still have the old-fashioned illusion that age, meaning old age, always brings wisdom. No. Never. Old age can be and has proven brutal on people by ruthlessly cutting all remaining chords of sanity.

If you want evidence that old age is taking a toll on someone just observe when they start to think they are some demi gods and that they are infallible and can rule the world even in their sleep. Such self-created demigods will never accept any wisdom from anyone. Sadly, their fall is always embarrassing and it is mostly children who remind them that their flies are showing.

Since Malawians voted in the May 21 2019 elections, it has been clear that the results were not to the taste of the majority who had agitated for change. Apart from the protests that became a routine, the discourse in public spaces have been that this government is taking people for granted and it must go.

Political parties, for once, allied in a prolonged court battle against a government they believed got into power through crooked means. The courts proved them right.

On February 3, 2019 Malawians of goodwill had a fine hour when the High Court sitting as the Constitutional Court annulled presidential election results declaring that Peter Mutharika, who now warms the presidential seat in acting capacity, was not duly elected.

But as recalcitrant as they always come, the Democratic Progressive Party (DPP) and its partner in crime Malawi Electoral Commission (Mec) went on a vain and wasteful sail to fight a ruling which even a kindergarten kid could have known was legit.

Now, what angers some of us is that Mec and its partner, the DPP have wasted our precious time. We could have moved on as a country other than being held hostage by an inane duo that has been desperate to have their sins washed through the courts. And then, as if they have not injured us enough, Mec and DPP rudely proceeded to the Supreme Court to defend their thievery knowing pretty well that the taxpayer—meaning you and me—will have to bear the cost of their buffoonery.

To put matters straight— and you can take this to the bank—Mec and the DPP are a curse amongst us and their arrogance, impunity and carelessness on issues that touch on sensibilities are irritating and boring.

I was pleased, very pleased when the finest hour for well-meaning Malawians came when the Supreme Court of Appeal reminded them that the two entities fall way short of respect and decency.

When she was announcing results, Jane Ansah, the woman who presided over the worst election ever had the guts to tell all Malawians that she had presided over a clean election. She, without an iota of shame, refused to resign despite all signs being there that the elections were flawed. She had to be left with eggs all over her face when her colleagues, High Court and Supreme Court of Appeal judges pointed at the glaring flaws of what was called an election.

And during the presentation of nomination papers, Mutharika, who is said to be a professor of law insisted that he won the elections clearly and fairly and that it was injudicious for the court to nullify election results.

But reality should be sinking in him that his mojo has wilted and he can no longer carry himself with the swagger of yesteryears. You do not need to be booed by locals to realise that the writing is on the wall.

If I were as old as Mutharika and have all that wealth, I would have folded my mat, go home and enjoy the twilight of my years other than being reduced to a subject of ridicule.

A nation in full fight