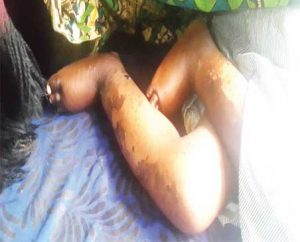 Shakira’s body looks swollen, especially her legs and arms. It appears bruised with visible incisions or tattoo marks (mphini) made by a traditional doctor to administer herbs straight into the bloodstream of a patient

Apparently, the three-year-old girl looks sick. Her mother, Mary Malekano, says she started showing symptoms a fortnight before this particular day. She had taken the girl to a herbalist because the family suspected witchcraft but the condition never changed.

Later, it turned out that it was a different ailment altogether when she was taken to hospital.

“They said she was malnourished and treated her for oedema,” says Malekano, who comes from Chimuti Village, Traditional Authority (T/A) Zulu in Mchinji.

Oedema is a build-up of fluid in the body which causes the affected tissue to become swollen.

However, the situation was different for Talandira Mazunzo, a five-year-old boy from Mkanda, who died after succumbing to malnutrition-related disease.

According to Mchinji District Hospital officials, Talandira was discharged but got sick again after his mother failed to give the right food to enable him to survive.

These are some of the cases of most children who are hit hard by malnutrition in the district.

The 2016 Malawi Demographic Health states that 44 percent of the children in Mchinji are stunted with 11 percent being severely stunted.

Ironically, such worrying statistics are in one of the districts regarded as a food basket for the nation.

Mchinji is one of the biggest farming districts in the Central Region and boasts of abundant produce even when other districts have low harvests.

Crop produce like soya, groundnuts and maize are usually in abundance every farming season. But sadly, this bountiful is not translated into the health of its people, especially children who are usually malnourished.

The district still experiences scarcity of food in families and continues to lose innocent children through malnutrition.

Mchinji District Hospital Nutritional Coordinator Cassius Mkandawire says there has been an increase in malnutrition-related deaths in the past two years.

Efforts to reduce acute malnutrition in the district are bearing minimal results despite several initiatives being made.

Experts point to multiple factors for the challenges associated with acute malnutrition in Mchinji.

Firstly is people’s obsession with myths and beliefs.

“When a child is malnourished and sick, most caregivers take the child to a herbalist or to church for prayer than to a health facility where they can get help through proper treatment and advice,” Mkandawire says.

He adds that some beliefs deny children nutritious foods ideal for their physical and cognitive development.

“Some women do not provide nutritious diet to their children. They say always think that such a diet is meant for their husbands, hence fuelling malnourishment in children,” he says

Food insecurity in households is said to be another factor. In Mchinji, premature harvesting of food crops is a common practice as biting hunger and lack of financial resources in the lean months of February and March force many to sell out their crops.

“Most of the crops are sold at give-away prices, especially during harvesting period. At the end, many families do not have adequate food to carry them through to the next farming season,” says Victor Kalongonda, Food and Nutrition Officer at Mchinji agriculture office.

The other factor is that many families lack skills and knowledge in preparing nutritious foods and tend to consume non-nutrition foods.

“For instance, most communities take soya as a cash crop and not as nutritious food to be used in families,” Kalongonda says. “Even when they use soya beans, they grind it without proper processing.”

He says soya bean is supposed to be processed by removing husks and pounded for nutritious by-products like soya milk, cakes and soya balls among others.

Kalongonda says another contributing factor to malnutrition is a widespread mindset and perception that maize and nsima, a dish from maize flour, is the only main source of food.

He suggests that the only way to deal with this challenge is to intensify sensitisation campaigns on the need for a diversified diet.

“People need to know that apart from nsima, other foods like potatoes and cassava can be taken as a main meal,” Kalongonda says

With the levels of stunting still hovering at around 52 percent due to malnutrition, Mchinji District Health Office intends to reduce such figures to around 25 percent, according to Mkandawire.

One of the measures is a recommendation that the District Nutrition Coordinating Committee should take a leading role in the implementation of nutrition interventions in the district.

“As a hospital, we need to see to it that a nurse is allocated to Nutrition Rehabilitation Unit Ward and there should be funding towards nutrition at council and sector level,” says Mkandawire.

Otherwise, the district may continue grappling with malnutrition-related diseases that are a threat to the life of a child and the general population.