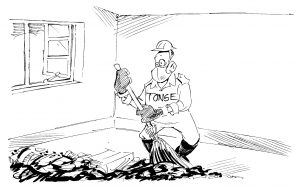 Over the past week, several individuals and organisations have been pressing the government to rid the public service of deadwood and individuals who are compromised if the country is to progress. Well, it is about time! I cannot believe that over three months into the new Tonse Alliance-led regime, we still can afford to be keeping in office some individuals whose actions and decisions over the past decade were not in favour of national development but serving the interests of political masters.

We must say in no uncertain terms that such individuals, masquerading as public officers, have no business whatsoever, being near neither taxpayers’ money nor funds provided by donor partners. It is a pity that real performers in public institutions have been trodden upon for years, being overlooked by appointing authorities whose criterion when appointing people was more to do with whether that individual is a party cadre (ndiwathu) or not (mperezi as they called them). That tendency must quickly come to a grinding halt.

Obviously, proper procedures have to be followed when giving the people concerned ‘marching orders’ to ensure that everything is played by the book but that, however, should not be a free pass for the government to dilly-dally in the name of pondering on steps to take.

This ship of ‘cleansing’ the public system should not stall, at any moment, and yes there should not be any hints of malice or jealousy accompanying it. It is plain and simple – we need to clear the systems at the soonest so that the Tonse Alliance led administration can fire from all cylinders and put in a sparkling performance as per the expectation of Malawians.

The danger of harbouring such mercenary ‘loyal and obedient’ servants is that they can end up doing more harm than good to the administration through sabotage and we certainly do not want that as a people.

I am mindful of the fact that some of the decisions might have financial implications but we are better off cutting our losses as a country now than to end up regretting in future. In the same spirit of ensuring an efficient and professional public service, government must do away with the bad habit of recruiting people based on political affiliation, appeasement and tribe because it is these nepotistic tendencies that have soiled the reputation of our public service.

The Tonse Alliance administration has, by now, ensured that it is well anchored and as such should offload excess baggage.

We should not, for a second, expect people who are, for example, answering criminal charges (no offence meant) to completely focus on running public office because, let us face it, their minds will be busy wandering off, trying to see if they can find a way through which they can survive whatever case it is they are answering.

No wonder there was so much impunity within the public service in the past decade because most parastatal heads and directors of government ministries and departments were always busy ‘chintu bii’ getting up to no good; even gracing presidential political rallies and, accompanying them on such errands would be vehicles from their respective organisations, busy ferrying party cadres and those dancing women. Such carelessness is the reason why public social service delivery has always been an issue because instead of using such resources to meet obligations of their firms, they were busy dancing to the tune of political masters. Such insolence must never again be tolerated.

While we are on the subject of acting with reckless abandon in the public service, this past week the High Court convicted former minister of home affairs and Democratic Progressive Party vice president, Uladi Mussa and one David Kwanjana, former Regional Immigration Officer, on three counts of using public office to the advantage of another, neglect of official duties and uttering false documents. This should serve as a lesson to people that are in office today, particularly political figureheads who tend to overstep their mark. When it comes down to it, those political masters will not be on hand to save you once the guillotine beckons.

It is a pity that many do not care about leaving behind a legacy so that once they are out of office or public position, Malawians should say, now, here was a man or woman and a half!

It does not matter whether you are a politician or political appointee. Malawians expect you to do the best you can in whatever role you are given but sadly that is usually skipped by a majority who get too conceited and instead of serving the people, they chose to serve their political masters, usually at their own peril as exemplified by the recent court case cited above.

My advise to the current government is; sweep the room clean.