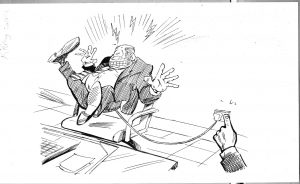 They are human beings and will make mistakes but, on paper, they really want to change and transform this place for the betterment of us all.

But there is a drawback. The nation has been in a lethargic state for over 30 years now and nothing has moved an inch to make Malawi a better place for all, apart from cosmetic development that politicians have been lying about all these years.

The system has been the same; bureaucratic, old and outdated.

It is in this context that the address the President made on Thursday last week should be seen.

The anguish he expressed at the slow pace of the change that Malawians voted for is down to this.

The speed at which the President wants the change to be implemented is not in sync with the system hence the frustration.

The end result is that Chakwera is an angry man and that was seen even in the tone that he employed on that fateful Thursday.

Certainly, he is a leader who should make things happen and chart the path that he wants for himself while having an eye on re-election in 2025.

Unfortunately, the art of running a government has never been a one-man show and there is so much that presidents can do and say but they depend on the system to actualise it.

This is even worse for Chakwera because he has inherited a government littered with Democratic Progressive Party (DPP) cadets whose loyalty is to someone else who is not leading government at the moment—former president Peter Mutharika.

These are the elements that will put the brakes at whatever agenda Chakwera has for the nation.

What is stopping the system from getting rid of such undesirable elements is the historical lethargy; making it impossible for the change that Malawians want to see implemented

Yes, the President is in charge but he can shout his lungs out and nothing will be implemented unless he has officials in place who share and believe in his vision to implement the change he wants to see to make Malawians happy.

There lies the problem. There are still countless faces in the system who do not share his vision because their loyalty lies somewhere.

And the solution firmly lies in what Chakwera already hinted on, which is to make good of his threats to remove any leaders in ministries, departments and agencies who do implement the transformation otherwise known as rubble clearing.

It is not a purge for the sake of it but a necessary process of pain to effect the change that Malawians desperately wanted on June 23 to get rid of the old order.

It cannot be business as usual with the same old faces that never wanted the change in the first place, with some of them actively fighting it.

Those that want to frustrate the system to stop the change that Malawians badly desire have sought to hide behind procedure and the law to perpetuate their desires.

But this should not be and it will not be because decent Malawians are rejecting it with all their might for the sake of the larger good of transformation.

Clearly, the President means well and he is up to the task. It comes naturally from him and he is passionate about it not just merely for his re-election prospects but because he believes in it.

There is nothing that our leaders can do about the growing interest of Malawians in how their country is run and that is why they will not leave Chakwera alone unless he clears the rubble as he promised them.

That is why there is deep revulsion among Malawians that when a fiasco of the magnitude of an MSCE examination leak happens, it is treated with deep disdain because they know it is just a symptom of the larger malaise of deep rooted inefficiencies, lack of patriotism, selfishness and corruption.

After all, in the end, Malawians hold the hottest end of the rod. Take the K4.5 billion bill that the nation will incur as a result of the re-administration of the exam. It is Malawians who will pick the tab through their taxes.

And so, someone must bear the responsibility; whether it is top management at Maneb or indeed Ministry of Education—someone must take the blame and pay for it.

The new government should learn from the fiasco at Maneb not to take things for granted that all is well as the system is still infested with saboteurs who can hit anytime.

But the biggest lesson of them all is that this is an inherited system steeped deep in bureaucracy, inefficiencies, corruption, lack of patriotism and the general.