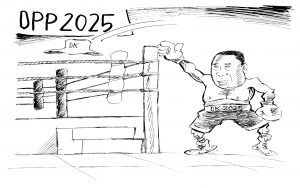 There are many people that, for some reason, failed to accomplish their set goals in the previous year; for some, it was due to their own shortcomings while, for others, it was merely an issue of conspiracy by fate.

Take candidates who failed to sit their Malawi School Certificate of Education (MSCE) examinations, for example. Not many of them were involved or had an idea of what some fellow candidates were up to but, in the end, all of them got punished and they now have been forced to re-take the exams. Indeed, life would sometimes hand you lemons instead of apples and, if you are smart, you would make lemonade instead of grumbling over the bitter lemons you have been handed. As we speak, the MSCE candidates have been handed that lifeline to re-take newly formulated papers and, hopefully, the wheat will be separated from the chuff. That is life for you and me.

Some of us have been fortunate enough to have made it into the New Year while others, no lesser mortals than ourselves, did not make it; may the good Lord bless their souls. Now, before some of you start getting shivers over the way my entry is flowing, you can relax a little because my point is simply to remind each one of us never to take any moment in life for granted. We should, as much as possible, try to make the best out of every moment while ducking some avoidable traps. Had somebody been alert and bold enough to blow the whistle before things went out of hand, I am certain our dear MSCE candidates would have by now completed their examinations but, just like I have said above, life happens and we just all have to make the best of each moment handed to us.

Allow me now to extend a hearty welcome to new kid on the block in the political arena, Dalitso Kabambe, who is former Reserve Bank of Malawi (RBM) governor. Kabambe made a bold move the other week when he announced his arrival on the political scene by joining the opposition Democratic Progressive Party (DPP). Well, bold in both the sense that he has made an unprecedented move and that DPP has in recent times been experiencing a lot of turbulence, owing to leadership struggles in the aftermath of the June 23 2020 presidential election loss.

Much as we know that crunching numbers at RBM was no easy task for the former governor, it will equally not be a stroll in the park in the DPP where camps have already emerged in anticipation of the presidential contest at a yet-to-be-announced party convention. Names have already been thrown in the hat by enthusiastic followers, suggesting that eastern region vice president Bright Msaka, former finance minister Joseph Mwanamvekha, party vice president for the South Kondwani Nankhumwa are all ready and set to square off anytime dates for the convention are announced.

If you ask former State president Peter Mutharika, who is the incumbent DPP leader, it probably has not been the kind of retirement he might have envisaged upon vacating House Number One, simply because the battle for party presidency, even before a convention is announced, has given him sleepless nights. Just fancy; he has had, in the just ended year, to contend with the likes of party secretary general Gresselder Jeffrey, jailed politician Christopher Nzomera Ngwira and Nankhumwa and a bunch of other officials who have told Mutharika in no uncertain terms that there is no better time than now for him to step down, after being trounced at the ballot in the fresh presidential election.

Now let us talk about India for a while, shall we? Just how the heck do you begin to explain a ‘flight-happy’ minister popping up in social media circles with a bandaged head when, we are told, he had only taken leave to be attended to a leg problem by medical experts? Somebody surely is trying to mess with Malawians on this. We, the Lilongwe City South East constituents (I am one to the core) are at a loss for words. If indeed the ‘honourable’ Minister of Sport Ulemu Msungama has abused his privilege by blowing taxpayers’ money and indeed jumping the queue of those on the waiting list for India at the Ministry of Health, then the tenant at House Number One should show him the exit door.

Unless, of course, there is more to it than we are being let on. If, God forbid, it were a case of a serious problem like cancer and the life of the minister was in danger, then, perhaps Malawians would be a bit pacified but still a plausible explanation would suffice. It hurts knowing that there are literally hundreds of Malawians in need of specialised treatment and then somebody would want to blow the little chance available by using the available limited facilities for a fad such as hair replacement.

Indeed, the more things change, the more they stay the same. Malawians certainly deserve better and I, for one, am taking no prisoners.