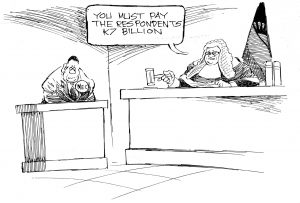 The High Court and the Supreme Court have ordered the Malawi Electoral Commission (Mec) to pay lawyers for President Dr Lazarus Chakwera and Vice President Dr Saulos Chilima K7 billion as total fees for the respondents in the Elections Case.

Fully appreciating where Malawi is at the moment and knowing the kind of small economy our country is, it has inevitably raised eyebrows among citizens.

So many things have happened since the first judgement delivered by the five judges in the Constitutional Court in February this year, who ordered a fresh election; a verdict which was upheld by the Supreme Court three months later in May.

We did hold the election on June 23 and we now have a new government in power and the rest is history.

To cut to the chase, as a nation, there is no doubt that our democracy has been saved as a result of the wonderful work that the respondents’ lawyers (Chakwera and Chilima’s lawyers) did and they surely deserve to be paid, which happens to all of us after doing an honest job.

Yet all this does not negate the fact that the bill is way too high at K7 billion that the courts ordered and one wonders which other profession can generate that kind of fee in poor Malawi.

The sad thing is that this money will not be paid by those public officers at Mec in the name of former chairperson Jane Ansah, together with the other commissioners who messed up the election that led to a fresh one.

Rather, Mec will request this money from the national kitty— the Treasury in Lilongwe.

Now, the Ministry of Finance does own businesses where it could collect money as dividends from State companies such as Electricity Supply Corporation of Malawi (Escom) and other parastatals.

The unfortunate bit is that these companies are in a mess and can hardly pay anything to government.

The only source of income where this money that Mec must have in less than 45 days is from your taxes and mine, which the Malawi Revenue Authority (MRA) collects on behalf of government.

Simply put, we Malawians are going to pick this tab and not Ansah and her fellow incompetent commissioners who put us all into this mess in the first place.

This group was even advised by all and sundry not to appeal the matter in the Supreme Court after the Constitutional Court made its ruling in February.

But because of their oversized ego, they incorrigibly refused to listen, thereby increasing the bill for the lawyers that did battle in court.

Mind you, the K7 billion is just for the lawyers of the President and Chilima and it excludes Mec’s own lawyers who probably have billed more. The figure circulating among citizens is that Mec lawyers will get K5 billion; totalling to K12 billion for both sets of lawyers.

It is quite telling of the arrogance of staff at Mec secretariat who refused this week to tell Malawians how much of their tax they are using to pay their own lawyers on top of the K7 billion.

This is a staggering amount and a burden for the taxpayers, yet it must be paid and there is time frame for it.

In an economy like this one, there are serious questions on whether professions such as law can be charging clients such high amounts in an economy that would struggle to absorb such monies.

At the end of the day, others would say democracy, which was served with a new government in power, is expensive and we should just be happy and pay up.

I submit that the anger that Malawians have at the moment should be directed not at the lawyers per se or their clients but Mec, a public body that brought us into this mess in the first place.

Mec even hired South African lawyers to argue their case in the Supreme Court. These too must be paid using taxpayers money although Mec thinks it is clever to say the opposite to Malawians.

That is why the Supreme Court in its ruling made it very clear that next time, it will order public officials who mess up in the duties to pay costs from their pockets other than asking taxpayers to do it like it has happened in this case.

I look forward to that day the Supreme Court will make good of its threat because this is what Malawians are saying in their anger.

Sadly, this bill is coming at a time the country is in need of abundant resources for more urgent things such as the fight against the Civid-19.

Talking of Covid-19, government has introduced new regulations on how to combat the disease that included banning of gatherings of more than 10 people and making masks mandatory in public places.

Hell has broken loose and the churches are up in arms, especially at the gatherings regulation, because they argue government has effectively banned them from conducting services.

Their entry point into the argument is that they were not consulted.

The reality of the matter is that it is not really about consultation but about churches clinging at the idea of not doing services for their flock.

When all is said and done, we must accept that there are contradictions in the regulations and probably they have not gone far enough because of the resultant implications.

For example, is there sense to ban gatherings of more than ten people but keep the markets open?

The previous government came up with similar regulations and even attempted closure of markets but Malawians said no.

Did politics play a role then and does it continue to do the same now?

Whatever answers are to these questions, the reality is Covid-19 is here and it is claiming lives that deserved to live.

It cannot be business as usual for everybody—without exception.

That is why we need all the resources to fight it.

That is why the K12 billion bill that Mec must pay lawyers leaves a bitter after taste.