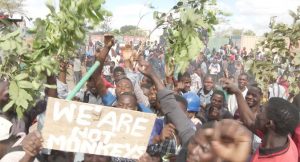 Workers for Terrastone Construction Limited which is building Malawi Bureau of Standards (MBS) laboratory complex in Blantyre have downed tools over alleged abuse and low pay.

The workers who are over 100 staged protests at the gates of the construction site yesterday morning to force Terrastone management to look into their challenges.

The workers allege that one of their bosses at the camp who has been there for not more than a week is very abusive.

One of the workers Langford Chapita—a brick layer—said they are enduring physical and emotional violence among others.

“He has been calling us names such as monkeys which we are tired of. He is so abusive that at times he can grab you by the neck while working on top of the building. He has only been here for three days but several people have been fired and some others have resigned,” he said.

The workers claim 12 of their colleagues have been fired with no apparent reason while 46 others have resigned in a space of a week.

The construction workers have also complained of low pay.

The staff are payed K21, 930 per fortnight. The pay includes K5, 355 for overtime and miscellaneous allowances of K2, 640 according to a September pay slip The Daily Times has seen.

Khombeya told them that their complaints had been emailed to the company’s headquarters in Lilongwe promising them a response by Tuesday.

“We have heard your complaints the main ones being abuse by top bosses and low pay. What I have done so far is to send the complaints to the company’s headquarters in Lilongwe who will make an informed decision by Tuesday this week. So we will not work today until Tuesday when we shall have the decision from the headquarters,” he said.

The two years construction project started in 2016 and is expected to provide exporters with internationally accredited testing services, reducing the need for re-testing, re-inspection and re-certification of their goods abroad.

The laboratory is valued at $12.7million—about K8.87billion, with the overall implementation framework guided by a Contribution Agreement between the European Union and the United Nations Development Programme.

Attendants cash in on the dead