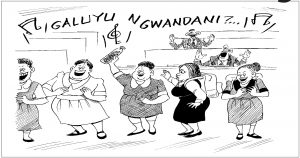 Now, our Parliament has over the years curved quite a reputation when it comes to legislators adhering to set dress code. Just the other week, we saw Thyolo Central legislator Ben Phiri being given marching orders for not wearing a neck-tie. Others would also recall years ago when then parliamentarian Lucius Banda drew the Speaker of the National Assembly’s wrath after showing up in the chamber wearing a ‘flashy’ suit. These are but just a few moments that are etched in people’s minds in as far as enforcement of dress code in our August House is concerned.

It was thus quite refreshing this past Tuesday when, probably for the first time in the history of our country, female parliamentarians did away with the dress code etiquette as they showed up in the House dressed in school uniforms, at the bidding of Minister of Gender Patricia Kaliati, as a way of remembering the African child and, indeed, inspiring that ‘out-of-sorts’ young girl who is yet to figure out just how important education is. One by one, they showed up at Parliament Building doorstep in school girl style.

And as per tradition demands that speakers of the House have to ensure ‘decorum and order’, they did not disappoint on Tuesday as the very Education Minister Agnes NyaLonje and her deputy were thrown out of the chamber for not adhering to the ‘dress code’ for the day; school uniform. Hang on a minute! Equally checked was the Speaker herself, Catherine Gotani Hara, when legislators ‘demanded’ that she too must do away with her official gown and embrace the dress code of the day.

It was all fun and play as the legislators reminisced of their school days by singing songs such as ‘galu uyu ngwandani wadya matemba’ and ‘bekeshu’. Some of the male legislators who stuck to their gentleman’s suit attire could not resist the temptation to join in. You should have seen ‘comedian Manganya’ (Oops, make that Cabinet Minister Michael Usi) throwing a jive all over the place when things hit a climax.

Everything else aside, I am sure the message was driven home by our honourable members to all girls far and wide that they should focus on their studies and let nothing stand in their way if they are to scale greater heights like some of the female legislators have.

Others have of course argued that there is more that our legislators ought to do than just ‘flaunting school uniforms’ if they are to create a conducive environment for the girl child. Just fancy; at a certain school in Mangochi, as exposed through Friday Shaker in the Daily Times a couple of weeks ago, close to 1,000 girls have to scramble for one toilet such that some of them end up missing classes for days while others drop out altogether due to poor hygiene. Some of them have no access to stuff like sanitary pads. That reminds me of what I saw on one of the international TV stations the other day whereby a celebrity, an accomplished musician, camped at a shopping mall where she urged shoppers who had change to spare to buy at least a single pack of sanitary pads and stash it in a box placed carefully near the shopping mall’s entrance so that it should at the end of the day be donated to girls in schools that are in remote areas. Now this, to me, was thinking outside the box.

Our girls should not cover long distance to access education services and must not be forced into self-boarding simply because the public schools they are learning at have no facilities for their convenience. Men, including male teachers at their respective schools, should not take advantage of the girls due to their vulnerability.

While pushing to uplift the girl child, we should not totally forget about boys because, at the end of the day, what we want is an educated citizenry regardless of gender; this is the only sure way to secure the future of our country.

Otherwise, it was a great start and a great day to see our female legislators strut their stuff in school uniforms.

Nowadays, the talk in town revolves around how tough life has become economically or as the modern day youth would put it, ‘pa ground sipali bho’.

However, it is up to each one of us at the end of the day to decide what to do with the lemons that life throws at us —either to lie back while detesting that bitter citrus fruit or, use the same to make lemonade. If you choose the lemonade route, you might just discover that in every dark cloud there is a silver lining and ‘pa ground paja pali bhobho’. Go at life with your best shot!