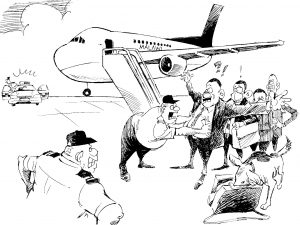 President Lazarus Chakwera last week paid a two-day solidarity state visit to South Africa meant to strengthen trade and immigration matters with a country that is a big trading partner for Malawi.

Sadly, Malawi will have nothing to show for the excursion because everything imploded in our faces due to one person: Prophet Shepherd Bushiri.

The background, in case you have jumped up (or is it down?) from Mars or any other planet yet to be discovered and named, is this:

Prophet Bushiri is a Malawian Pentecostal pastor who decided in 2011 to migrate and conduct his business in South Africa and establish his church, otherwise known as Enlightened Christian Gathering (ECG).

Before anyone could open their eyes, the Malawian had taken South Africa by storm and swept everyone who cared to pay attention off their feet.

The next thing he was flying in expensive private jets and, as would have been expected, attracted authorities’ attention and before long, crimes answering to the names of fraud and money laundering started being thrown at him but nothing stuck.

Then from nowhere, about last month, Bushiri was arrested together with his wife Mary and thrown into the cooler where he spent two weeks before being granted an expensive bail.

Fast forward all this to last weekend when news filtered through on Saturday that Bushiri and his wife have bolted South Africa and are on home soil, in the process jumping bail for the fraud and money laundering they are accused of.

This was news in itself but it carried more news values with the fact that about the same time, President Chakwera had paid a state visit, his first, to South Africa as new Head of State of sovereign Malawi.

As I said, everything about that trip went wrong.

The President and his entourage were delayed for seven hours and some members of his entourage endured extraordinary degrading searches at the hands of the menacing South African security cadres.

Clearly the actions of the South African forces were completely disrespectful, going to the extent of even accusing the President of trying to smuggle out Bushiri on the presidential plane using the excuse that those who came as advance party for the trip could only board the plane from OR Tambo Airport and not the military base of Waterkloof where the President had landed the previous day.

This is simply humiliating to us as a nation. This was our President who they were doing this to. I bet they cannot do the same to a US President or UK Prime Minister.

It is poor Malawi, after all.

The fact that the South African government later said Bushiri did not escape from their clutches through the President’s plane, does not help matters and neither does it justify this senseless humiliation.

The mere thought of thinking the President could sink so low as to sanction someone answering crimes to board his plane just shows how low South African authorities think about Malawi and its leaders.

The damage had already been done.

Probably government, or specifically Minister of Foreign Affairs, should have done more as a formal protest to express anger at how the President was treated as Head of State for a sovereign nation that we are.

Talking of Bushiri himself, he and his wife are the ones that are holding the hottest end of the rod and the rest of us can only comment from far.

He has done what he thought was the best thing for himself and his family when he felt he was not safe in a foreign country where he lived.

Nobody waits for danger to strike before you run away from it. Nobody plays games with an assassin gun.

The prophet is essentially justifying his departure from South Africa on the fact that he thought he would not get justice there as he claims that the officials who were dealing with his case were highly compromised and asked a bribe from him so that they drop his cases.

This is something that cannot just be swept under the carpet.

Understandably, everyone in South Africa is up in arms, from President Cyril Ramaposa and Ministers such as Tito Mboweni for Finance and Home Affairs to the media and the common man.

One wonders what special crime Bushiri has done to them to court so much controversy and hatred.

But, as Information Minister Gospel Kazako said, government was not with Bushiri in South Africa to be responsible for his departure for home.

The South Africans should worry about their borders and not asking government officials here how Bushiri entered Malawi.

It is his country for crying out loud. Why would Malawi refuse its returning citizen his right to come home?

The fact that the South African law enforcement agencies are breathing fire, cancelling bail for Bushiri and his wife, processing extradition for the two and asking Interpol to issue warrant of arrest, is none of our business.

Let the due lawful process take place here with the rights of Bushiri and his wife as expressed in the Constitution and other laws fully respected.

President Chakwera has made it very clear, he will not interfere.

It is a good move yet at the end of the day the Malawian government will find it difficult to play ball and hand over its own citizen to a foreign government to be tried when he is making it very clear his life is in danger and he believes he will not get justice.

Legal commentators say the road to extradition, if at all, is long and arduous and that already Bushiri has assembled the best brains as a legal team to defend him.

The take home message here is that South Africa does not respect us looking at how they treated our President.

They should have known, right from the start, that the President cannot give a lift to a fugitive.

They did what they did because they do not take us seriously and are full of disrespect.