There were rains in most parts of Blantyre on Sunday afternoon but the gods smiled at Black Missionaries and team at Civo Ground, Gadaga, Chileka where they successfully hosted the 16th Edition of the Evison Matafale Memorial show.

The rains only started when people were on their way home.

Last year the free memorial show which was held at the same venue ended prematurely due to heavy rains and wind which destroyed instruments and the stage.

Ahead of the show, Black Missionaries lead vocalist, Anjiru Fumulani, prayed for a good weather and God surely heard their prayers.

It threatened to rain at some point but the clouds cleared giving hundreds of people a chance to celebrate the lives of late Matafale, Musamude and Gift Fumulani as well as other Chileka fallen artists.

The gigantic audience enjoyed reggae music throughout and those with dreadlocks kept them flying in appreciation of the sound.

The ants did not find freedom on the afternoon as people stamped their feet on the ground for longer periods. 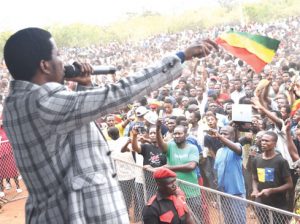 In some instances, the audience sang along to the songs and at one point when Anthony Makondetsa was on stage, they responded by saying that ‘timalizeni tasala pati’ a clear indication that they had been given a good treat.

The Rastafarian colours of green, gold and red dominated with others painting their faces which were being done by some people who played a fast one to cash in from such art.

Several other businesses made a killing from the show and these include sale of Chamba, chips, beer and roasted meat.

Some people walked from as far as Mbayani, Machinjiri and Lunzu to be part of the memorial which was violent-free and ended in good time.

Anjiru said they have had problems in the previous years prolonging the memorial until the night.

“First of all let me thank God for giving us the good weather. We were worried because last year the show was disrupted by rains. We planned well in all the areas including security and again we kept time,” Anjiru said.

He said they planned that the show would end at 6pm to give a chance to people to walk to their homes without in good time and without any problems.

“We are thankful that, every year, people come out in large numbers and this is a clear indication that people have embraced the memorial show. We are also happy that they now know its importance and over the past two years we have had no violence,” Anjiru said.

He also called for peace and love among Malawians ahead of the elections next year saying this is the message that Matafale, Musamude and Gift preached in most of their songs.

Moda reminded people of his brother’s exploits when he performed his songs including ‘Mphamvu Yake Mulungu’.

With time running out, the acts did not offer more songs including Black Missionaries as each was restricted to three to four songs.

Unlike in other shows where they are left to perform at the end, Black Missionaries, which this year launched Kuimba 11 performed earlier before leaving the stage for Lambani Dube.

Longtime friend of Matafale, Lawrence Chaziya, said he is happy that the memorial continues to celebrate Matafale’s life.

“Once again people came in large numbers and they have enjoyed and celebrate the life of Matafale, Musamude and Gift Fumulani. But it still pains me that up to now the truth has not yet come out. We still need to know the truth as to who killed Matafale,” Chaziya said.

There was an announcement later that Wailing Brothers and Dan Lu would perform but they did not.

Matafale, who formed and led Black Missionaries, died on November 27 2001 while in police custody following his arrest after authoring what was considered seditious material.