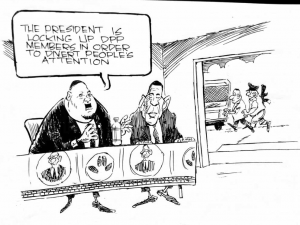 President Lazarus Chakwera shocked the nation on Saturday night in a radio broadcast when he revealed that a June 2019 National Audit Office forensic has revealed that K1.3 trillion has been lost in the country in the past six years under the Democratic Progressive Party (DPP) administration.

The President then assured Malawians that all who did this will face the law, insisting that he has renegaded on his earlier stand; that the culprits just paying back the monies is not enough but they must face the full wrath of the law. To this effect, Chakwera said he had instructed his Justice Minister Titus Mvalo to make sure the necessary agencies such as Police, the Anti-Corruption Bureau (ACB) and the Judiciary all work together to ensure that the cases that came about as a result of this huge loss and pilferage are dealt with expeditiously.

This week the President’s address was followed up with high profile arrests in the name of former director general of State Residences Peter Mukhito in connection with the K5 billion cement importation scandal as well as the re-arrest of Norman Chisale and this time, it has something to do with the death of Issa Jaunju.

The other high profile arrest was that of Malawi Energy Regulatory Authority (Mera) CEO Collins Magalasi together with a business partner Dorothy Shonga in connection with fraud at the energy regulator. So another week and another round of arrests by the new government as it attempts what it says is meant to clean up the rubble.

Now, K1.3 trillion is not small change and it is a crime that the DPP must explain to Malawians and yes, those DPP characters behind it must pay back as the citizens have no reason to believe the President is exaggerating the figure behind the colossal loss. In an attempt to do just that this week, Leader of Opposition Kondwani Nankhumwa had other ideas for the nation. He held a press conference jointly with the last former finance minister in the DPP regime, Joseph Mwanamveka where they vehemently and passionately argued that the President has been misled and that K1.3 trillion is on the higher side because, after all, the new government found something in the kitty.

As politicians, they did not forget to add a political byte for a good measure. They said the President said what he said because he wants to find an excuse to keep on locking up DPP members suspected of fraud and corruption in order to divert people’s attention from the ‘unrealistic promises’ he made to Malawians during the campaign. But in the end, this attempt by Nankhumwa and Mwanamveka as well as those who sent them to white-wash their six year in government will not wash in the eyes of Malawians. This is so because Malawians are in the mood of justice and accountability from the DPP for the things the party did while in power for the past six years.

What is currently happening is not in any way an attempt– as DPP stalwarts want us to believe and keep telling us so–to politically deal with DPP. Rather, it is an attempt to clear the rubble and teach a lesson to politicians that they cannot steal from Malawians and hope to get away with it. As for Nankhumwa, he represents the future of DPP and that is what he must project from now onwards if what he said the other day that the party will come back to power in 2025 has any little chance of becoming a reality. Defending the indefensible about figures being stolen during the six years DPP was in power is not exactly what will make Malawians forget the overwhelming malaise of the past six years. In the end, many Malawians are joining Minister of Information Gospel Kadzako to ask Nankhumwa to reveal what is the right figure that the functionaries of DPP stole while in government, if he is disputing the K1.3 trillion Chakwera told the nation on Saturday night. Or can Nankhunwa put his hand on his chest and tell Malawians nothing was stolen when everyday documents and figures are flying around and arrests being made of those suspected of stealing public money through fraud and corruption?

What is Nankhumwa talking about? The message that Malawians expect to hear from the DPP is one of apology and contriteness if only to show that the party is taking responsibility for the clear undeniable mess it has caused in the past six years. Nankhumwa and Mwanamvekha exhibited arrogance and we-do-notcare-attitude by trying to defend the indefensible.

This is something that Malawians hate so much about the DPP. The Idea that anything can be explained away instead of taking responsibility is what probably made Malawians fire Peter Mutharika on June 23 but it appears the party he leads has not learnt its lesson. The good thing Malawians are ready to punish such attitude as they did in June and continue to do so by refusing to be duped by the laughable DPP propaganda that the arrests are politically motivated. Malawians can see through this and will not pay attention to feeble attempts to defend the indefensible.