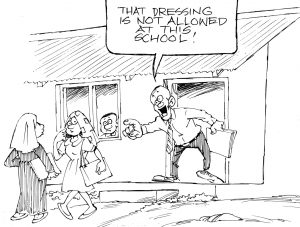 Two incidents have taken place in Malawi that should send a chill down the spine of any Malawian who wants the country to concentrate only on things that can take us forward as a nation.

In Balaka last Monday, Muslims and Christians engaged in a fierce battle over disagreements to do with wearing of hijab in schools, something that resulted in casualties and closure of some schools which are affiliated to the Anglican Church.

The violence resulted in at least two persons being seriously injured.

The issue was that two Muslim girls were prevented from attending school at M’manga School for wearing a hijab, a requisite of their Muslim faith.

The voice of reason for this has neither come from government nor religious bodies such as Public Affairs Committee (Pac).

Instead, it was the United Nations Resident Representative Maria Jose Torres who expressed concern about the ongoing religious intolerance and has since asked the authorities to quickly resolve the matters to avoid disadvantaging the girl child from going to school.

In a statement, Torres emphasised that the rights to freedom of expression and religion are fundamental rights that ensure human dignity and a functional democracy and that preventing access to services such as education because students choose to wear an expression of their religion goes against these important human rights and international standards on freedom of education.

She quoted Section 36 (3)(c) (III) of the Education Act (2013) that stipulates that: “The school or college shall not impose restrictions of whatever nature with respect to the admission of students, recruitment and appointment of staff.”

The second incident that also took place in the Eastern Region, specifically Mangochi, is about Muslims breaking and damaging a liquor shop as they were coming from afternoon prayers because their religion forbids consumption of alcohol and did what they did in an attempt to make the tourism district alcohol-free just as they attempted to make it pork-free some years ago.

In both incidents, I see one thing. The things that some Malawians fight for are pure nonsensical that you tend to wonder what benefit they think will accrue out of it at the end of the day.

Of what benefit would anyone in their right mind stop a child from attending school all because are wearing a hijab in respect of their religions when the laws of this country are very clear that there should not be discrimination in education institutions based on dress?

I cannot imagine that folks in Balaka even went to the extent of injuring each other all because of this simple misunderstanding instead of coming to a roundtable.

Why do we have Pac that has both Muslim and Christian leaders if they cannot sort out such inter-religious problems? Are they there just to castigate politicians and try to mediate between them?

What is it that Malawians are smoking these days that all we think about is harming each other at every little offence we think others have committed against us?

People are coming from praying and supplicating to Allah and then they want to inflict hurt on others afterwards because they think alcohol should not be sold in the lakeshore and tourism district because their religion forbids it?

This is the thinking that retards development in Malawi at a time when others right here in Africa are going forward after sorting out these petty differences.

While we are busy refusing to leave behind things that derail our unity and nation-building such as petty inter-religious fights, tribalism, regionalism and nepotism, others with similar problems are getting over them and moving on to do great things for themselves. They have results to show for it.

Kenya has over the years been ripped apart by post-electoral violence famously leading to their own election results annulment case in 2017 by the Supreme Court that sent shock waves across Africa.

The case underlined the need for electoral bodies to be careful in the management of elections.

But they have left that behind and they managed to put in a reconciliation commission that will release its report shortly with key recommendations such as that there should be balance in public appointments rather than to go to one tribe or region.

They are even proposing that when a minister is from one tribe, then the deputy must be from another tribe just to balance things up and achieve unity and nation-building.

A taxi driver in Nairobi told me at the airport that with the handshake between President Uhuru Kenyatta and opposition leader Raila Odinga, peace and unity have been achieved in the country.

He said those who left the country because of the violence are coming back with investments that are creating jobs and wealth, leading to vibrant and public infrastructure programmes that everyone can see and appreciate.

With Malawi, it is the opposite on the ground. Tribalism, nepotism, regionalism and religious fundamentalism are still the order of the day in all what we do.

The net effect is that there is anger in a bigger chunk of the population who are refusing to imagine that they must live with the status quo for another five years,

These are not accepting the status quo.

The country is not progressing in anything. Chaos is reigning supreme with low-standard infrastructure being developed in the country as exemplified everywhere by poor and unambitious buildings.

These are spreading fast and everywhere like bushfire while others are progressing right here in Africa with gargantuan projects among other things.

In the final analysis, let us stop being foolish and stupid and concentrate on the bigger picture other than the pettiness we see all over in front of us.

This country belongs to all of us and let us put in place structures that ensure we all enjoy its resources as this is the only way that will keep it unified and fair to live in.

Let us stop the nonsense of tribalism, nepotism, regionalism and religious fundamentalism.