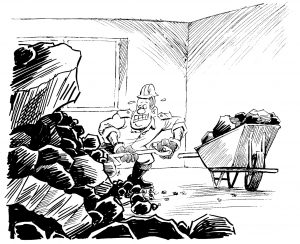 Malawians went to the polls on June 23 after the courts had nullified the May 21, 2019 presidential election with high hopes that they would change things in this country. And they managed to do that by electing the Tonse Alliance led by the pair of Lazarus Chakwera and Saulos Chilima to lead this country for the next five years.

That was just the starting point of more expectations. It became apparent that opportunities in the previous administration were a preserve of a few connected individuals such that the nation became appallingly polarised along regional and tribal lines.

Then as the process of cleaning the rubble—as pronounced by President Chakwera—started, we were told that the rot had reached cataclysmic levels with Anti- Corruption Bureau Director- General Reyneck Matemba describing it as a Tsunami.

Now, for Matemba to use that term, he must have, as he confessed, preliminarily seen something that was almost inconceivable. Of course, those of us who paid attention to reports which were coming out regarding the plunder of public resources did not really express shock at Matemba’s declaration.

That public resources were being abused with careless abandon must have been known by anyone who dared to care. But what would eventually matter after the change of government was the action that would be taken to clean that mess.

It started with the arrest of some high-profile individuals even though some sections of society believe that investigating agencies are not doing enough. Well, perhaps, we should give them some time as they would not be happy to take cases to court when they have not gathered enough evidence to lead to convictions.

But then, there are others who believe the Tonse Alliance-led administration is relaxing too much in terms of its process of clearing the rubble.

Maybe, for these, there could not be enough basis for moving them but it is always important to remember that the process of clearing the rubble ought to consider that some officers who remain in their positions have the ability of frustrating the implementation of policies by the Tonse Alliance government.

Already, there are those who fear that systems are already being compromised by some officers linked with the former governing party who are still in public positions.

There have been some movements but it appears Malawians are still waiting for more. While this may be seen as victimisation, it is a general practice world over that every administration works with the people they trust.

Of course, from the very beginning, everyone working in the public service must conduct themselves apolitically and be eager to support development policies of a present government. But the truth is that we are coming from a past where some public servants became so political that their loyalty was to a political party that was governing and not to Malawians who are essentially their employers.

The Tonse Alliance-led administration has the opportunity of depoliticising the public service and it must start with clearing the rubble that has been ‘exposed’ by various stakeholders including the ACB.

On the other hand, the government needs to be careful when cleansing the public service. Legal implications of such decisions must be taken into consideration so that at the end, taxpayers do not cough out billions of kwacha to compensate those who successfully sue for unfair dismissal.

But then there are other officials who found themselves working in the public service simply because they are related to some politicians or other authorities. In such cases, proper processes of getting public employment are not followed and purging those officers is not something that should take forever.

A lot has been said about people who got jobs in the government just through some verbal instruction with some of them not having qualifications required for the positions they are holding. Why should acting on such individuals take forever?

There are also concerns that cases involving some people implicated in fraud and corruption are taking too long before some progress can clearly be seen on them. While the argument from investigating and prosecution agencies is that criminal cases bordering on fraud and corruption take time before they are concluded, Malawians still want things to be done differently this time.

There are fears that some cases that have already been set in motion may eventually die away without any tangible conclusion. Such fears are based on what has happened in the past. The moment governments change, there is some excitement when it comes to dealing with fraud and corruption but with time, the thrill dies away.

But the Tonse Alliance administration promised that things would be different. It is that difference that Malawians want to see.

The passion with which President Chakwera made the declaration that his administration wants to clear the rubble so that when it starts earnestly implementing his administration’s development and other policies, those with ‘tainted’ hands should be out of the way, should be real.

Otherwise, it seems most Malawians are not convinced that the process is out full throttle. They speculate that perhaps the first actions of clearing the rubble that they have seen were just some smokescreen attempts that would eventually disappear in the mists of time.