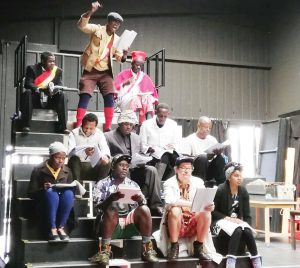 This is a play which was written by Nobel prize-winner Wole Soyinka. Soyinka, a playwright, novelist, poet and polemical essayist, was born in Nigeria in 1934.

Unlike Mjumira, Bulambo and Katimba, who have had the experience starring in several productions and connecting with other international actors, it is a different story with Kamuloni and Makande, who are partaking in such a production for the first time.

It is also the first time for Makande, who is an ex-convict and Kamuloni, to star in a play in Europe.

In 2018, Mjumira showed the world that Malawi has great talent when he played a lead role in a Theater Konstanz production titled Fear Eats the Soul. The play toured Germany before touring in Malawi.

For a long time, people in the country have spoken highly of theatre being dead and that there was more to be done to revive it.

But the several productions that some of the country’s actors have starred in through collaborations with powerhouses such as Theater Konstanz in Germany was a clear testimony that the country has potential.

There are also players from Germany as the hosts with Africa also having Togo, Tanzania and Congo.

“It is a good experience, we are currently undergoing massive rehearsals. The play is talking about corrupt leaders. It tackles almost all the areas including the church where there is even corruption. It looks for instance, at the behaviour of the clergy, who normally preach about doing good but do the opposite,” Mjumira said.

It also looks at the civil society, who are supposed to be watchdogs but do the opposite.

He said the play is expected to be premiered on April 4 2020 before going on a tour.

“This play is very rich because it looks at what is happening in Africa including Malawi. So far so good, the Malawi team is doing well although it is still early,” Mjumira said.

“We are happy to work with some of the famous actors in Germany. It is unfortunate that back home creativity is not given the attention it deserves and yet it has potential to among others, fight unemployment. Having Africa connect with Europe through theatre is something special.

Mjumira said the play has a cast of 15 and that with extras it goes up to over 20.

“15 are the main players in the cast. We are sharing ideas, learning from each other and when we go back home after three months, we will not be the same,” he said.

Makande said apart from English, the play has a mixture of languages.

“There is so much we are learning and as I have indicated, the play has a mixture of languages and now everyone has been challenged to learn German and even work on the pronunciation of some of the words,” Makande said.

Makande has risen to the occasion as an ex-convict, who learnt theatre in prison, to show that he had been empowered and that he was no longer the same.

“As I have always said, I never knew that I would have a chance to come to Europe but here I am because of theatre. Talent is expensive and I am happy that my expensive talent has taken me to Germany. It is unfortunate that many of the ex-convicts after the release, some people still feel we have not changed but this is not true, we change and I am one of them,” he said.

He moaned his colleagues – Chimwemwe Foster, who was popularly known as Chigaza in the theatrical circles and Kumbukani Tembo, who were also ex-convicts and were killed recently in mob justice after allegedly being suspected to have been involved in theft.

Makande used to star with Foster and Tembo in Nkhokwe Arts and in fact according to Mjumira, Foster was supposed to star in King Baabu after the Germany tour.

According to its brief synopsis, King Baabu is a naked satire on the rule of General Abacha in Nigeria, the play chronicles the debauched rule of General Basha Bash who takes power in a coup and exchanges his general’s uniform for a robe and crown re-christening himself King Baabu.

In the manner of Alfred Jarry’s Ubu Roi, Soyinka develops a special childish language for his cast of characters who have names like Potipoo and General Uzi.

Weaving together burlesque comedy, theatrical excess and storytelling, King Baabu has already been coined as a pet name for the despot par excellence.

For now, the country can only wait for the play when it comes down to Malawi after its Germany tour and surely there is need for more of such connections and collaborations in the creative industry.