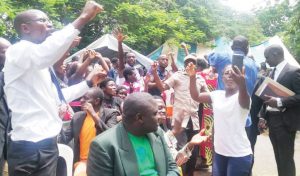 On Tuesday, the 3rd of March, memories—both bitter and sweet—came raining. Memories only I can recall with exactitude.

Those were the days. Those were the times. That was the season. On a day such as was on Tuesday, it was criminal to do anything merry. It was a cardinal sin to see you munching with glee the mangoes from the carelessly placed mango tree. No one could have considered the innocence in the sweetness of the succulent mango.

Dear Kuwala, legend spreads about a young man who thought he was god or, at least, an advocate of the gods. March 3 was his day. A day he punished people with the confidence of impunity. They called him Maniford of anything sounding akin to such.

One asked, dear Kuwala, why must a people allow themselves to be chained mentally? Why must people gaze while their liberties are being taken away by

people who bleed the same colour of blood? Why must people allow slavery haunt them and push them to ignominy?

At the dawn of the decade, things changed. There was a moment of awakening. The chains fell. We had our new found liberties. Dear Kuwala, if you have never seen lizards scuttling in the undergrowth, then I can paint a vivid picture for you. Time, they say, is a savage, and has its way of twisting our fortunes.

So, dear Kuwala, this country you and I live in has seen a lot. A lot that you might not comprehend being as young and innocent as you are. You might be blinded by the glare of infancy. But what your innocent eyes can hear and what your unaltered ears can hear are some that we have already sensed when we were young, just as you are.

We, too, went through a season of torture and hate. We relapsed into a state of belief that there are people who had the license of gods amongst us. We feared them. We pinned our tails between our hinds. We were in awe of their prowess. There was a time dear Kuwala.

With time we had a moment of awakening. We realised these were not gods. They never would have been. One by one, we started questioning them. Who are you to lord over us? Gods?

Now dear Kuwala, pick it from me. These people who will come and pose as gods are just as suspect as we all are. What, perhaps, they have so far is their closeness to power. But the truth remains that we shall all, as they say, unite in the intimate democracy of death.

Why, dear Kuwala, must one shake in fear of another human being whose body bleeds as we all do? Must we by all other means be afraid of each other simply because one is closest to the country’s first employee?

When we flip back the pages of our national history, let us remember that we have done away with more oppressive regimes than what we have now. As a citizen who believes in our liberties and anthem of patriotism, I refuse to be under some gods who think this country belongs to them only.

Let those who think are gods and have the illusion that they will be there forever remember that there was a time.