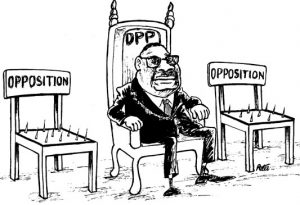 The fact that MCP president Lazarus Chakwera missed a national unifying event—the commemoration of first freedom fighter John Chilembwe— because he had enough reasons to expect his security would be compromised is, again, stark reminder that our leaders cannot stand each, thereby violating one of the basic principles in multiparty democracy, which is tolerance of political adversaries.

I cannot blame Chakwera because he remembered a similar occasion last year, when things did not end well for him after he was attacked by ruffians he believed were sympathisers of the ruling DPP.

He had a right to stay away from a function he believed would just bring misery to him, which was a shame as John Chilembwe stood for something else – which was emancipation and happiness for the whole nation and not just a chosen few.

But I am the least surprised. This country will get very polarised as we inch towards 2019.

State functions will be the preserve of State President Peter Mutharika and his minions for fear of losing the shine as a presidential candidate in his own right.

The five-year tenancy of Mutharika is coming to an end on May 21 and many are challenging for the job. As we learnt last week, so far, 12 candidates have collected nomination papers from Malawi Electoral Commission (Mec) offices.

The game is on and tension will also escalate.

But the minimum Malawians want is some decency so that the values that make us one nation should not be sacrificed at the altar of personal glory or self-serving interests.

It is becoming increasingly alarming that almost any State function where all our political leaders gather should end in trouble.

Whether it is the funeral of Paramount Chief Chikulamayembe or launch of a tribal grouping such as Chibanja cha Ayao, it is the same issue of polarisation as a result of our leaders not standing each other.

So far, the Malawi Police Service (MPS) has not proffered any decent explanation as to why the two aides from the Vice- President office—Kushi Unyolo and Joshua Valera– were locked up although they have charged them with the easiest of charges the police throw at anybody – conduct likely to breach peace after allegedly displaying suspicious behaviour in Liwonde.

Owners of the function, Chibanja cha Ayao, have been very categorical in disputing this version of events from the Police and insist that there was nothing untoward as regards the behaviour of the two gentlemen and that all they were doing was to look for those who could receive a gift they carried from the Vice-President to Paramount Chief Kawinga during the occasion.

In the end, this was an unjustified and unwarranted arrest of individuals who meant no harm in my view; otherwise, why is the Police not mentioning what is it that the two did or have done that amounted to any illegality.

The question that Malawians are asking for the umpteenth time is whether their politicians cannot stand each other even for one hour when they are together.

Should Malawians always expect tension and petty quarrels – as it happened in Rumphi during the burial of the Paramount Chief—or those in power locking up others in stinking cells to punish political opponents when the two sides meet up?

Related to the above is the fact that legislator for Mulanje South Bon Kalindo has spent the weekend in the police cell in Zomba at Eastern Region Police Headquarters after the magistrate adjourned his ruling on bail application to last Monday after he was arrested in Lilongwe for allegedly displaying disorderly conduct at Balaka Police Station and insulting Mutharika when the two aides for the Vice-President were in police custody.

On this one, my verdict is very straightforward. The President must be respected as a human being first of all and, of course, as the leader of the nation and, as such, insulting him is not acceptable at all.

That said, Malawians enjoy freedom of speech as enshrined in the Constitution and are free to question the President on, say, how he is running this country including the policies he is pursuing and how he is using laws that are not consistent with the Constitution to harass Malawians he does not like such as Kalindo.

If any president—past, present or future – has problems with Malawians exercising their freedom of expression to comment on matters of the state, then they are in a wrong job.

They are out there to gag citizens, which cannot happen because we changed the template of how we want to be governed in 1993 when about 63 percent of voters voted for multiparty system of government to enjoy, among other things, freedom to hold an opinion and impart the same on others.

At the end of the day, a president must be tolerant and able to ignore citizens, such as Kalindo, who are loud and showy.

If a mere village person is able to tolerate all sorts of nuisance from rascals in village, what about a whole president?

Our politicians should learn to coexist and respect one another as these unnecessary arrests are just stoking unnecessary tension in the country as we inch towards 2019 elections.

As a nation, we also need to test some of these archaic laws politicians use to arrest each other against the provisions of the Constitution that guarantee freedom of expression to see whether or not they are still relevant in 21st century Malawi.

We need politicians who are tolerant with each other in line with the new order that Malawians chose in 1993.

We only have one Malawi, which must not be destroyed by irresponsible politicians because they cannot stand each other.

The sad part of it all is that the tension caused by politicians who do not see the decency to coexist has permeated to the ground where the repercussions are too hard to imagine.

Has Kalindo not just been beaten up in Mulanje after spending the weekend on remand in Zomba?

Pursuit of survival in dark caves