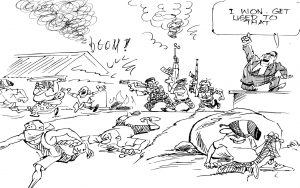 Something good came from Africa a couple of days ago. The 2019 Nobel Peace Prize was awarded to Ethiopian Prime Minister Abiy Ahmed for making peace last year with bitter foe Eritrea.

He was awarded the prize for his efforts to “achieve peace and international cooperation”.

This might sound distant to Malawi but those who are conversant with the border feud between the two countries will recognise that the two sides slaughtered each other in the senseless fight that claimed over 100,000 lives on both sides.

But upon being installed Prime Minister in April last year, the first thing that Ahmad did was to fly to Asmara, the capital of Eritrea and shake the hand of his counterpart, Isaias Afwerki, signalling the end of a 20-year bitter feud between the neighbours that were once one country.

Through that bravery, peace was restored between the two countries such that as we speak, embassies have been opened in both capitals and flights have been restored.

Ahmed, who even fought in the war when he was in the army, has achieved greatness through this courage.

Malawi is burning and we have started counting bodies as a result of political differences after the May 21 elections.

Like Nero, in the ancient Roman Empire, who was partying while Rome was burning, our leaders are busy protecting their territory and apportioning blame on each other.

The severity of the matter is so big that it has attracted the attention of United Nations Human Rights Commission in Geneva, which spoke with concern on the increase in violent protests across Malawi, and the lack of a meaningful dialogue to halt the mounting tension.

The commission has reminded Malawian authorities of their obligation to respect the rights of freedom of expression and peaceful assembly, and to distinguish between violent actors and peaceful demonstrators, urging demonstrators to express their grievances peacefully, without resorting to violence.

The UN is also reminding the authorities that the use of force during demonstrations should only be applied in exceptional circumstances, in accordance with applicable international human rights norms and standards, including the principles of legality, necessity and proportionality.

This was followed up with a joint statement from the heads of missions of Germany, Ireland, Japan, Norway, the United Kingdom and the United States who also talked of similar concerns of the violence that has taken place since the elections in May 2019, including criminal acts and hate speech.

Their concerns border on loss of life, damage to property and businesses, and disruption to livelihoods of many Malawians that have been experienced

The donors also put the spotlight on prevention of further violence as well as prompt and impartial investigations into all criminal acts, ensuring due process is followed and that holding individuals to account for their actions without discrimination is key.

Sadly, it is just the opposite that is happening. Our leaders are defending their territories and do not care a hoot of the damage the tension is bringing to the country.

Our leaders are not inspired by leaders such as Ahmed to do what is in the interest on the nation if they want to leave behind a legacy that their children will be proud of.

On the contrary, the noise of senselessness is getting louder by the day and this is not helping matters at all.

Three ministers on Friday, led by Nicholas Dausi of Homeland Security addressed a press conference in which they alleged that Human Rights Defenders Coalition (HRDC), together with Malawi Congress Party and UTM, are planning to destabilise the country by burning markets to which the three reacted angrily and asked government to produce evidence.

Probably, the ministers were just following the example of their boss, President Peter Mutharika, who went ahead to address a rally in Kawale, Lilongwe, despite the death of a police officer at Msundwe and engaged in explosive rhetoric that he won the May 21 elections despite the matter being in court, arguing those against him are just jealous of him.

But if politicians needed proof that their actions and words are making this country dangerous to live in since May 21, they just need to read the UN and donors’ statement which has been very un-ambivalent in their condemnation of what we are doing, telling us how to safeguard the human rights of all Malawians.

The problems are the inflated egos our leaders are busy massaging to protect their territories through senseless exchanges while we are counting bodies and businesses are floundering, putting livelihoods of innocent Malawians at stake.

And it will get worse. Every week, something crops up necessitating heavy army and police presence becoming a constant feature in our cities. The President himself is heavily guarded wherever he goes.

It might seem a necessity and becoming a norm to him, but it looks bad for citizens when you have a government that seems to think the show of force of the army and police is the modus operandi to govern.

It creates fear and panic in the citizenry to begin to think that they are living in a state of emergency.

Guns are blazing and critical players such as HRDC chairperson Timothy Mtambo claimed last week his car was shot at and that he survived by God’s grace from what he considers an assassination attempt.

In any country, this should further ring the bell.

Our leaders should think beyond their noses and think about the legacy they want to leave behind.

It takes special courage in a leader to disregard bad advisors, hangers on or toxic tribesman to extend the olive branch to what their outfits consider enemies to achieve peace.

But those that study political history will attest to the fact that it is only such courageous leaders such as the late Nelson Mandela that achieve long lasting legacy.

All the others are just journeymen and Malawi must be providing to the world a huge chunk of such journeymen.

Our leaders are so selfish that they do not want such greatness.

Africa together again for netball

No such thing as free education

A tale of two Americans