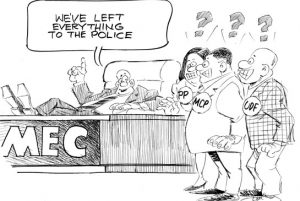 The Daily Times of Friday October 26 reported that police are investigating how and why a biometric voter registration piece of equipment, being used in the ongoing voter registration exercise, found its way on a train coming from Mozambique.

This story has been followed up with another in which another piece of voter registration equipment has been reported stolen in Mzuzu.

As was expected, all the major political parties such as PP, MCP and UTM, including the ruling DPP, are up in arms, fearing that this is an attempt to rig next year’s vote by registering Mozambicans to participate.

They have refused to accept the Malawi Electoral Commission (Mec) explanation to the effect that the kit went missing in transit to Mwanza with the assurance no data has been compromised.

Sensing the pressure, Mec addressed a press conference in Lilongwe at which it said the machine was used for conduct civil registration and not voter registration and that the body wanted to use it in Mwanza in the fourth phase but it did not arrive there.

Let us be abundantly clear. There is no evidence that Mozambicans have registered to vote in our elections next year but Malawians are livid with anger while conspiracy theories are swirling around because of the reaction of Mec.

The commission has left many questions hanging and unanswered. All Mec has done is to simply say this is a mere case of theft—a criminal act.

Suppose this is, indeed, a case of theft, then who has been arrested? In whose hands was the machine when it was being transferred from Lilongwe to Mwanza as Mec is claiming? Who was the actual person having it in transit? Have the people who had the machine been arrested? Who are they? Was the machine in a train from Lilongwe to Mwanza? Did Mec use public transport on that particular day? Why in a goods train? In whose name was it?

Other pertinent questions are what was the business of a vehicle from the Office of the President and Cabinet to carry such a sensitive piece of equipment at this point of the electoral process when President Peter Mutharika, as a contender, is an interested party? Why was it carried in an open vehicle when Mec itself says such sensitive equipment is carried in a closed vehicle?

Why was the public not informed about this important development or indeed the political parties in a closed-door meeting if Mec’s line of thinking was to avoid alarming the public? Where exactly did Vale Logistics find the material in Mozambique and it was with whom and under what circumstances?

Who at Vale found the material and how did they realise that it belongs to Mec? What was the specific date?

The press conference Mec convened in Lilongwe and subsequent explanations have not provided the answers to these questions and left the country more confused than ever before.

Mec seems to suggest that this is a small matter of theft but the safety of registration goes to the heart of safeguarding the integrity of the election the nation is supposed to hold in May next year.

There is some evidence that some Mozambicans beat the system and got our national IDs as was revealed by district registrar at the National Registration Bureau Winston Kalambo.

District Commissioner for Mulanje Charles Makanga confirmed Mozambicans registered as citizens of this country and he blamed chiefs for helping them to get our national ID.

What can stop Mozambicans that have registered as citizens of Malawi to also register to vote?

Sadly, the response of Mec to this whole saga is one of laissez-faire attitude as they have left everything to police and are stingy with information to Malawians about how this machine ended up in Mozambique.

Mec is treating the so-called case of theft as that of car or phone when we are talking about voter registration machine of an election to determine who should be given power next year.

The present commissioners of MEC are making too many mistakes and I am afraid their integrity is being eroded on daily basis.

Their credibility to administer a credible election in a free and fair manner is seriously impaired.

The registration of voters is beset with so many problems as exemplified by low morale among registration staff, low numbers of registrants in some areas and Mec’s non-commitment to revisit these areas so that all voters who want to register must register.

As we are speaking, there is a case raging after MCP took Mec to court to force it to conduct supplementary registration in districts such as Dedza, Kasungu and Salima where the party feels there was low turnout.

The High Court sitting in Lilongwe ruled that Mec must indeed respond to MCP’s demands within a specified time. In other words, the court saw merit in MCP’s demands.

When you see this, coupled with the issue of the registration machine being mysteriously found in Mozambique, there should be serious doubts on whether this commission is going to deliver a clean election whose results will be accepted by all competitors.

Those who say probably the only way out is for Mec leadership to go might have a point.

After all, if that were to happen, it would not be the first to be sacked before conducting the polls.

Some commissioners are too partisan. They are card-carrying members of political parties.

Mec should appreciate this point and that what is at stake next year is power and who governs.

Elections are a double-edged sword as they can deliver either stability or chaos.

All depends on how they are conducted.

What is happening now is not inspiring. It is a recipe for disaster as chances are high that foreigners have registered for our elections.

This is something that could have a bearing on election results, compromising the fact that the result should be truly the will of Malawians.

Facts surrounding the registration kit saga are not adding up.